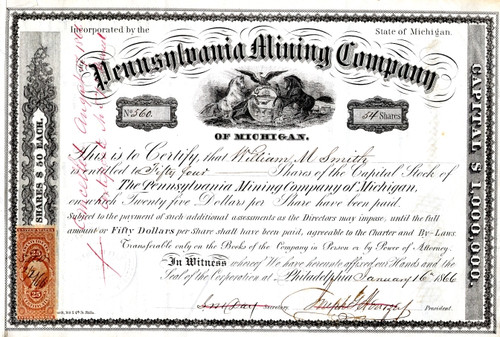 Beautiful certificate from the Pennsylvania Mining Company issued in 1866. This historic document was printed by Theo Leonhardt and has an ornate border around it with a vignette of two horses, a shield and an eagle. This item has been hand signed by the Company's President, and Secretary, and is over 145 years old.

Certificate Vignette
Pennsylvania Mining Co of Michigan company was formed through the reorganization of the failed Northwest Copper Company. The Northwest itself was formed in 1849 from the previously existing Northwest Copper Mining Association formed in 1847. The Pennsylvania located new prospects in light of the poor return the previous mines had yielded. History from Wikipedia and OldCompany.com (old stock certificate research service)