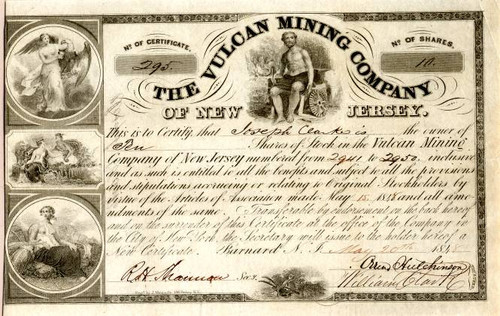 Beautiful certificate from the Vulcan Mining Company printed in 1848. This historic document was printed by the J. Meignelle and has an ornate border around it with three vignettes along left edge of allegorical women, each with different animals. Vignette at top center of a blacksmith with a wrap around his waist. Small vignette at center bottom of farm tools. This item has the signatures of Orren Hutchinson and William Clark, Trustees, and R. H. Shannon Secretary, and is over 163 years old. Trimmed on left edge. EF.

Certificate Vignette
VULCAN (NO. 2). The Vulcan Mining Company, had location 98, in Ontonagon county, from the War Department, and begun work in 1848, in the spring of which year a cave occupied by porcupines was found to be an ancient mine-opening left by prehistoric workmen. Stone hammers, axes, etc., were discovered where the miners had plied their calling. The Vulcan Mining Co is listed as obsolete in the Mines Handbook, 1918. It notes, "Operated, 1848, on War Dept. lease No. 98, in Ontonagon Co, Mich." Lawton (1888, p. 94-98) describes two mines with the name Vulcan located in the Menominee Range. However, from his write-ups, it appears production in this district did not begin until the late 1870's.