Check signed by actress Fanny Davenport from the Chemical National Bank of New York issued in 1895. This item is over 108 years old. 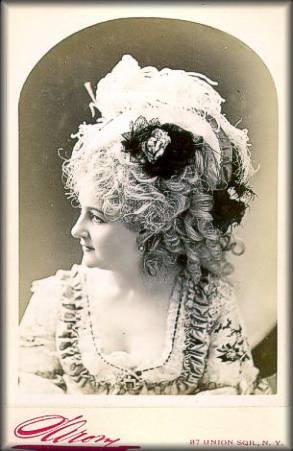 Fanny Davenport
Fanny Davenport (1850-1898) Born in London, England, on April 10, 1850, Fanny Davenport was the daughter of Edward L. Davenport, an American actor. She grew up in Boston from 1854 and took naturally to the theater from an early age. She essayed her first speaking part at the age of six and took a substantial role in Faint Heart Never Won Fair Lady, produced by her father and J.W. Wallack, Jr., in 1862. At age 15 she played her first adult role. She then joined a stock company in Louisville, Kentucky, and shortly afterward joined the company of Louisa Lane Drew's Arch Street Theatre in Philadelphia, Pennsylvania. In 1869 she moved to Augustin Daly's Fifth Avenue Theatre company in New York City. She gained much experience under Daly and enjoyed considerable success in a wide variety of roles, particularly in W.S. Gilbert's Charity in 1874 and Daly's own Pique in 1876. In 1877 Davenport bought the rights to Pique from Daly and formed her own touring company with herself as starring attraction. She gradually expanded the repertory of her company and had several increasingly successful seasons. One of her touring hits was Anna E. Dickinson's An American Girl in 1880. While in England in 1882 she purchased American rights to Victorien Sardou's FÃ©dora, which was at the time a great hit for Sarah Bernhardt in Paris. From its New York premiere in 1883 through tours lasting until 1887, FÃ©dora was an equally great and lucrative success for Fanny Davenport in America. Several Sardou productions followed: La Tosca in 1888, Cleopatra in 1890, and Gismonda in 1894. Her last undertaking, a lavish production of F.A. Mathews' A Soldier of France in 1897, was an expensive failure. After a final stage appearance at Chicago's Grand Opera House in March 1898, Davenport retired to her vacation home in South Duxbury, Massachusetts, where she died on September 26, 1898.