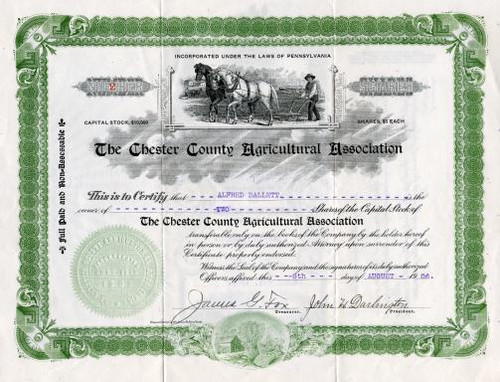 Beautifully engraved certificate from the Chester County Agricultural Association issued in 1906. This historic documenthas an ornate border around it with a vignette of a farmer plowing his crops. This item is hand signed by the Company's President, John. H. Darlington and Secretary, James G. Fox and is over 99 years old.

Certificate Vignette
Chester County was organized in 1682. The territory was granted to William Penn from King Charles II, and was named for Cheshire, England. In 1789 the present limits of the county - consisting of 760 square miles - were formed. When the Europeans first settled in Chester County there were Indian villages in several areas. The land was settled by English Quakers, Scots, Irish, and the Pennsylvania Dutch. Chester County played a significant part in the founding of our nation, including the Battle of Brandywine, the Paoli Massacre and the Valley Forge encampment. Situated for the most part in the fertile Piedmont Upland section, where the terrain is rolling and elevations range below 1,000 feet, the county contains many exceptionally fine farms and estates. The eastern portion of Chester County has become a residential area, reflecting the westward advance of metropolitan Philadelphia. The population of Chester County has historically been agriculturally-based and grew at a slower rate than the United States and the region until 1940. Since 1940 there has been an accelerated migration to Chester County from urban centers. Agricultural and horticultural activities have maintained a strong position in the economy of the county. Greenhouse products, roses, dairy products, and mushrooms provide a major source of income. Chester County has become the mushroom growing center of the United States. The first steel to be manufactured in America was produced in 1732 at Coventry Forge, North Coventry Township. Today the largest industry in terms of employment is the primary metal producers, who employ nearly one-quarter of the county's industrial work force. In addition to the many cultural and recreational facilities shared with the Philadelphia metropolitan area, the county has its own attractions, including several Revolutionary War sites. You can also see modern mushroom growing houses and grazing land for thousands of Santa Gertrudis cattle. Chester County lies in the southeast corner of the state and is bounded on the south by the states of Delaware and Maryland. There are 57 townships, 15 boroughs including West Chester, the county seat, and one city. The TriCounty Area Chamber of Commerce serves the municipalities of East Coventry, East Nantmeal, East Vincent, North Coventry, South Coventry, Spring City, Warwick and West Vincent in Chester County.

Chester County Agricultural Society (vignette of a woman with cattle) - 1867