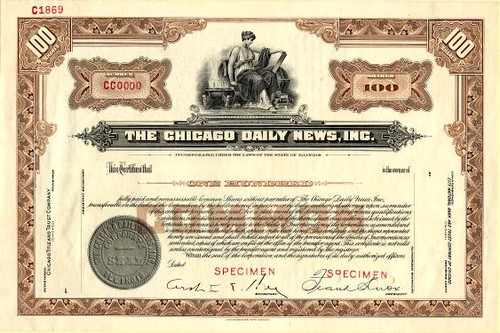 Beautifully engraved RARE specimen certificate from Chicago Daily News, Inc. dated 1935. This historic document was printed by Columbian Bank Note Company and has an ornate border around it with a vignette of a woman sitting next to a globe and books. This item has the printed signatures of the Company's President, Frank Knox and Secretary and is over 77 years old. This is the first time we have had this for sale and believe it to be quite rare, possible unique.

Certificate Vignette
The Chicago Daily News was an afternoon daily newspaper based in Chicago, Illinois, and published between 1876 and 1978. The paper was founded by Melville E. Stone in 1875 and began publishing early the next year. It strove for mass readership in contrast with its primary competitor, the Chicago Tribune, which was more influential among the city's elites; for many years, the Daily News boasted a 1¢ newsstand price. The Chicago Daily News pioneered certain areas of reporting, opening one of the first foreign bureaus among U.S. newspapers in 1898 and starting one of the first columns devoted to radio in 1922. It was known for its distinctive, aggressive writing style which 1920s editor Henry Justin Smith likened to a daily novel. In its heydey from the 1930s to 1950s it was widely syndicated and boasted a first-class foreign news service. In 1929 it moved into a new 26-floor headquarters building at 400 W Madison Street. Designed by architects Holabird & Root, the Art Deco structure became a Chicago landmark, and stands today under the name Riverside Plaza. It featured a mural by John W. Norton depicting the newspaper production process. After a long period of ownership by Knight Newspapers (later Knight-Ridder), the paper was acquired in 1959 by Field Enterprises, heirs to the former owner of the Marshall Field and Company department store chain and the rival Chicago Sun-Times. Thereafter the newspaper entered a decline partly due to mismanagement but also due to demographic changes. Sales of afternoon dailies declined with the rise of television, and downtown newspapers suffered as readers moved to the suburbs. The Chicago Daily News published its last edition on March 4, 1978. William Franklin "Frank" Knox (January 1, 1874April 28, 1944) was the Secretary of the Navy under Franklin D. Roosevelt during most of World War II. He was also the Republican vice presidential candidate in 1936. William Franklin Knox was born in Boston, Massachusetts. He attended Alma College, in Michigan, and served in Cuba with the Rough Riders during the Spanish-American War. Following that conflict, Knox became a newspaper reporter in Grand Rapids, Michigan, the beginning of a career that grew to include the ownership of several papers. He changed his first name to Frank in about 1900. During World War I, Knox was an advocate of preparedness and United States participation. He served as an artillery officer in France after America entered the hostilities. In 1930, Frank Knox became publisher and part owner of the Chicago Daily News. An active Republican, he was that party's nominee for vice president in the 1936 election, under Alf Landon. Landon and Knox lost by a landslide, winning just Maine and Vermont. Knox, who was an internationalist and supporter of the World War II Allies, became Secretary of the Navy in July 1940, as President Roosevelt strived to create bi-partisan appeal for his foreign and defense policies following the defeat of France. As Secretary, Frank Knox worked hard to expand the US Navy into a force capable of fighting in both the Atlantic and Pacific. His selection of new uniformed leadership in the wake of the attack on Pearl Harbor was important to seeing the Navy through the difficult times early in the war. Though he tended to leave military matters to the officer corps, his administrative talents and good judgment made invaluable contributions to the victory that he would not live to see. Following a brief series of heart attacks, Secretary Knox died in Washington, D.C. on April 28, 1944. USS Frank Knox is named in his honor. Fort Knox is named in honor of another famous Knox, Henry Knox. History from Wikipedia. About Specimens Specimen Certificates are actual certificates that have never been issued. They were usually kept by the printers in their permanent archives as their only example of a particular certificate. Sometimes you will see a hand stamp on the certificate that says "Do not remove from file". Specimens were also used to show prospective clients different types of certificate designs that were available. Specimen certificates are usually much scarcer than issued certificates. In fact, many times they are the only way to get a certificate for a particular company because the issued certificates were redeemed and destroyed. In a few instances, Specimen certificates we made for a company but were never used because a different design was chosen by the company. These certificates are normally stamped "Specimen" or they have small holes spelling the word specimen. Most of the time they don't have a serial number, or they have a serial number of 00000. This is an exciting sector of the hobby that grown in popularity over the past several years.