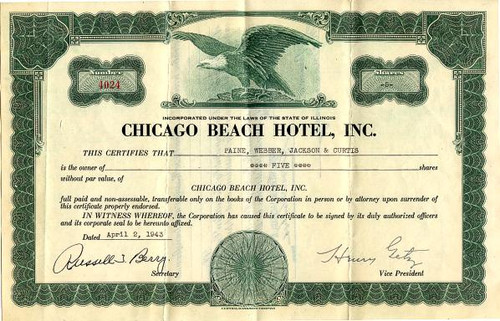 Beautiful certificate from the Chicago Beach Hotel, Inc issued in 1943. This historic document was printed by Central Banknote Company and has an ornate border around it with a vignette of an eagle. This item has the signatures of the Company's Vice-President and Secretary and is over 69 years old. 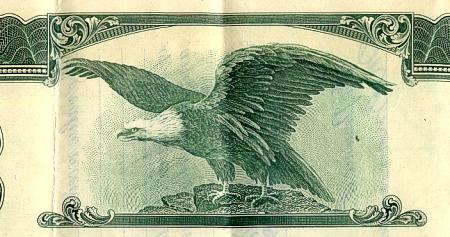 Certificate Vignette
The Chicago Beach Hotel was a Chicago, Illinois hotel located in the Kenwood neighborhood on the property that currently houses Regents Park. The Hotel was built at East Hyde Park Boulevard (51st Street) and Cornell Avenue in 1890 and then rebuilt in 1911. The second Chicago Beach Hotel, built in 1929 at 5100-5110 South Cornell Avenue, was added to the National Register of Historic Places on May 14, 1986; the original Chicago Beach Hotel is no longer extant. The building extended to Lake Michigan. The building resembled the Hyde Park Hotel and probably shared architects. The building was rebuilt as a 12 story resort. Many Chicagoans of high social standing became residents and members. The building had private access to the beach until 1915 when the city created an adjacent bathhouse. After World War II, the building served as the 5th Army Headquarters. It was one of many speculative hotels built to accommodate the Columbian Exposition of 1893 that was later replaced by a luxury apartment building. Now, the Regents Park apartments are located on the property. History from Wikipedia and OldCompanyResearch.com (old stock certificate research service).