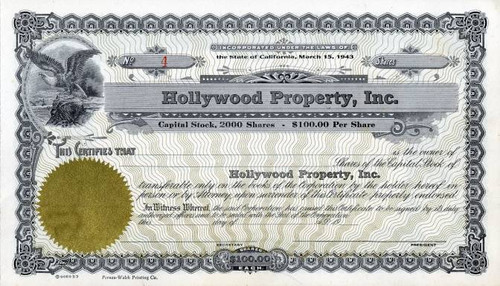 Unissued stock certificate from the Hollywood Property, Inc. printed in 1943. This historic document was printed by the Pernau-Walsh Printing Company and has an ornate border around it with a vignette of an the company name. 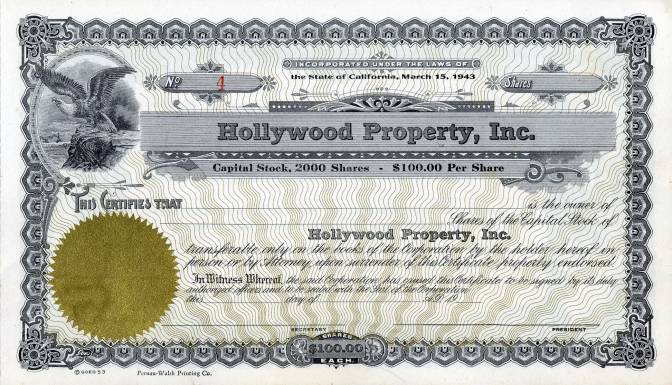 Certificate
Hollywood Property, Inc. was founded in 1943 by Lawrence Borg who was the sole owner and president until his death. The company's purpose was to buy real estate in Hollywood and otter California cities including Salinas, Santa Clara, Palo Alto, Burlingame, San Francisco, Napa, Calistoga, Hollywood, and Balboa Island. BORG, Lawrence, Theatre executive, was born on the Island of Malta, Feburary 10, 1890. Son of Francisco And Carmela (Farrugia) Borg. His father was a cabinetmaker. Lawrence Borg attended school in his birthplace and learned the art of cabinetmaking from his father as a boy. At the age of nineteen he went to Sidney, Australia, where he worked at that trade for seven years. In 1916, he came to the United States and settled in California, where he was variously a carpenter, operator of his own taxicab, quarryman, and a worker in shipyards during the First World War. In 1919 Borg acquired sufficient capital to purchase the Courtland Theatre, San Francisco; http://www.cinematour.com/picview.php?db=us&id=68520 in 1925 he added a second theatre to his holdings by building the Rivoli Theatre http://cinematreasures.org/theater/5084/ in Berkeley, California; and in 1926 he bacame owner of teh Parkway Theatre,Berkeley. The Rivoli and Parkway were thus sold in 1931 to the Golden State Theatre & Realty Corp., San Francisco, the Courtland having been sold previously. Meanwhile in 1928 he bacame half owner of the Crystal Theatre Lease and Business in Salinas, California. http://www.sjsu.edu/faculty/wooda/southbaydeco/crystal.jpeg Under the Name of Crystal Theatre Company, , Inc., and was president of the corporation which in 1935 built the El Rey Theatre in Salinas.http://www.loopnet.com/Listing/16617588/361-365-Main-Street-Salinas-CA/?SRID=901162132&StepID=101 This corporation was dissolved in 1941, after which he was owner of half of the Crystal Theatre lease and business and El Ray Theatre property and business. In 1953 the Crystal Theatre property was sold, although he maintained a one-half interest in the El Rey Theatre until the colose of this life. Borg Also built the Alisal Theatre in Salinas in 1947 http://cinematreasures.org/theater/7170/ and was part owner of that property with John Peters and Fox West Coast Theatres until he sold his interest in 1949. Meanwhile, in 1933 he became half owner of the Fox and State Theatres leases and business in Napa, Calfornia, and in 1935 Sole owner. In 1936 he built and began operation of the Uptown Theatre in Napa http://www.uptowntheatrenapa.com/history/ and in 1938 converted the State Theatre into the Napa Bowl, a bowling alley, which he operated for a year. He sold the Uptown, Fox and State leases to the Blumfield Theatres, San Francisco. He also built the Santa Rosa, California Bowling Alley in 1938 and operated it until 1940 when it was sold. In the previous year he had founded L.B. Industries, INC., a California Corporation, and was sole owner and president of this company , which acquired in 1940 the Ritz Theatre in Calistoga, California. One half of this interest was sold in teh following year to his business manager Thomas C. Malloy, Jr., with whom he was associated after 1930. in 1950 Borg built and became operator of the Studio Theatre, San Jose, California, of which he was sole owner until the time of his death. (Sold by Borg Family Trust in 1990 Appx). He also founded in 1943 as was the sole owner and president until his death of Hollywood Property, Inc., for the purchase of real estate in Hollywood and ohter California ciies. Through the years he acquired centrally located, downtown business property in such California cities as Salinas, Santa Clara, Palo Alto, Burlingame, San Francisco, Napa, Calistoga, Hollywood, and Balboa Island. Borg contributed to many civic and welfare groups and was a member of the Variety club of San Francisco. His religious affiliation was with the Roman Catholic church. He became a citizen of this country in 1921, and politically he was a Republican. Photagraphy was one of his principal hobbies, and he enjoyed reading and traveling in his leisure time. He was married in Los Angeles, CA May 21, 1943, to Marjorie Ella, daughter of Frederick William Fraser of Hollywood, California. A telephone Company employee. Borg died without issue in San Mateo, California on October 30, 1954. History from Wikipedia and OldCompany.com (old stock certificate research service)