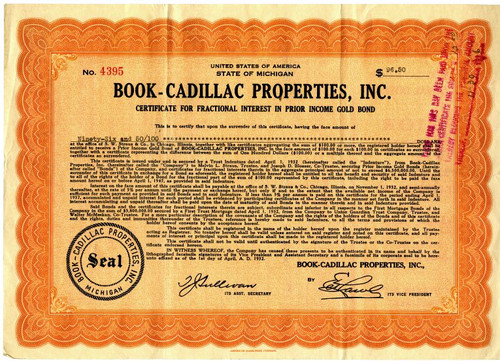 Beautifully engraved certificate from the Book - Cadillac Properties, Inc dated 1932. This historic document was printed by the American Banknote Company and has an ornate border around it. When E.M. Statler opened his new hotel at the foot of Washington Blvd. in 1915 the Book brothers J.B., Herbert, and Frank were no doubt both pleased and jealous. They had a vision for Washington Blvd. that it would become the "5th Avenue of the West." The Books planned to accomplish this feat with the construction of a series of new buildings along the thoroughfare filled with fine offices and shops. The crown jewel would be a grand hotel to compete with the Statler. In 1917 the Book's purchased the old Cadillac Hotel at the corner of Michigan Avenue and Washington Blvd. However, the First World War made materials for new construction hard to obtain. Thus the Books had their architect, Alvin E. Harley, renovate the old Cadillac for $60,000. It was a temporary fix. By 1923 the old hotel was gone and work had begun on the Book-Cadillac. For the new project the Books hired their favorite architect Louis Kamper. Though an established architect, Kamper had little experience designing hotels. To gain a knowledge of hotel layout he studied the Statler Hotels in Detroit and New York among others. He had plenty of knowledge for decoration and choose an elaborate Venetian style of the Italian Renaissance. He gave the lower five floors of the exterior a facing of stone. The ground floor which was given over entirely to shops had ornate metal storefronts. Above these were tall arched windows set between massive pilasters. The upper floors created a 'shaft' of simple brick occasionally relieved by a band of stone. Above a ornate cornice rose three copper terraces. These terraces gave the hotel a unique profile. This was a common practice for the time as architects sought ways to make their buildings stand out. Not matter which angle you saw it from, the Book-Cadillac was a dramatic addition to the city's skyline. The interiors were equally impressive. The Book-Cadillac featured five floors of grand public rooms and shops. Among the amenities were large lounges, three dining rooms, a coffee shop, three unique and functional ballrooms, and a tea room. They were the most richly decorated interiors found in any Detroit hotel. All told, the Book-Cadillac was a massive construction project which required 2 years of planning. At 33 floors it was both the tallest building in Detroit and the tallest hotel in the world. This no doubt being the reason that the top floor had a radio station, WCX. The hotel had a total of 1136 guest rooms There were 1035 bedrooms, 54 sitting rooms, 8 alcove rooms, and 38 sample rooms. The silver service contained 50,000 pieces. Three basement levels contained the most modern boilers and laundry facilities of the time. The total cost of construction exceeded $14,000,000. The Book-Cadillac enjoyed success for 6 years. However, with the onset of the Great Depression the situation began to sour for the hotel. The great ambitions of the Book brothers were cut short, a massive 81 story Book Tower would never be built. By 1931 the hotel was forced into receivership and ultimately changed hands twice in only twenty years.