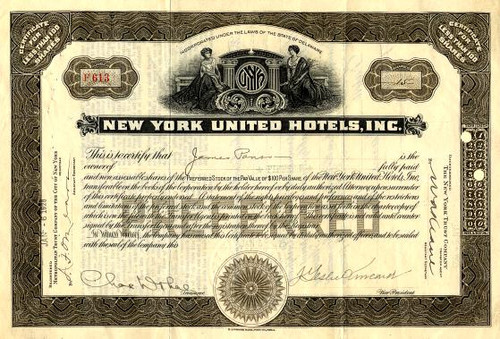 Beautifully engraved certificate from the New York United Hotels issued in 1925. This historic document was printed by E.A. Wright Bank Note Company and has an ornate border around it with a vignette of a two allegorical women. This item has the signatures of the Company's V. President, James Leslie Kincaid and Secretary, Chas. Doherty and is over 81 years old.

Certificate Vignette
New York United Hotels, Inc. built the Roosevelt Hotel. The hotel is a prominent landmark situated on Madison Avenue and 45th Street in midtown New York City, The Roosevelt Hotel was named in honor of President Theodore Roosevelt. The New York City hotel opened September 22, 1924 and celebrated its 80th anniversary in 2004. Its historic heritage is reflected in the meticulously restored interiors, designed to capture the original architecture and offer modern-day amenities. With 1,015 well-appointed New York City hotel accommodations, including 52 luxurious suites, The Roosevelt Hotel combines the classic styling of yesteryear with the modern conveniences of today.