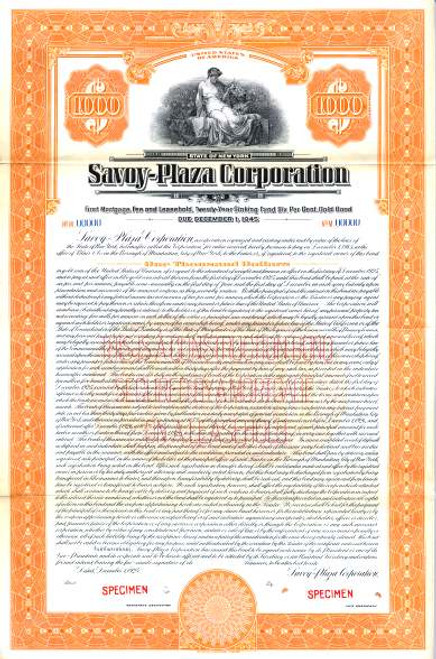 Beautifully engraved Rare SPECIMEN First Mortgage Gold Bond certificate from the Savoy-Plaza Corporation dated 1925. This historic document was printed by the American Bank Note Company and has an ornate border around it with a vignette of an allegorical woman sitting and looking at the grapes held in her hand. Minor splits on folds with tape repair on verso. This item is over 88 years old. 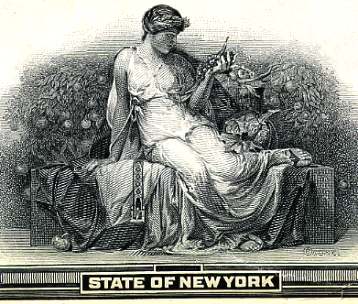 Certificate Vignette
The Savoy Plaza Hotel dominated the New York midtown gateway to Central Park for about two decades before these two skyscraper hotels were built, the Pierre and the Sherry-Netherland hotels, two blocks and two years apart, quickly became two of the most recognized profiles in the world until the incursion several decades later of the mammoth General Motors Building. The General Motors Building replaced the very elegant, formal, twin-chimneyed Savoy Plaza Hotel that had been designed by McKim, Mead & White directly across Fifth Avenue from the Plaza Hotel. The Savoy Plaza was, in fact, the best looking of this group of super luxury hotels though it was far shorter and bulkier than the Pierre and Sherry Netherland. About Specimens Specimen Certificates are actual certificates that have never been issued. They were usually kept by the printers in their permanent archives as their only example of a particular certificate. Sometimes you will see a hand stamp on the certificate that says "Do not remove from file". Specimens were also used to show prospective clients different types of certificate designs that were available. Specimen certificates are usually much scarcer than issued certificates. In fact, many times they are the only way to get a certificate for a particular company because the issued certificates were redeemed and destroyed. In a few instances, Specimen certificates were made for a company but were never used because a different design was chosen by the company. These certificates are normally stamped "Specimen" or they have small holes spelling the word specimen. Most of the time they don't have a serial number, or they have a serial number of 00000. This is an exciting sector of the hobby that has grown in popularity over the past several years.