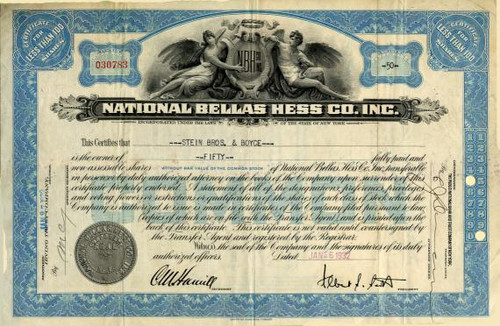 Beautifully engraved certificate from the National Bellas Hess Co. Inc. issued in 1932. This historic document was printed by the American Banknote Company and has an ornate border around it with a vignette of the company's logo with an angel on both sides. This item has the printed signatures of the Company's President and Secretary and is over 73 years old.

Certificate Vignette
National Cloak & Suit was founded about 1888 and was reorganized as the National Bellas Hess Co. Inc. in 1910. At one time National Bellas Hess was one of the top five mail order companies in the country. In the 1960s. the company generated sales of over $250-million a year with 25 million catalogues mailed annually. Bellas Hess survived until the late 1970s. In a famous 1968 court case, the U.S. Supreme Court decided in the company's favor against the state of Illinois. This landmark case stated that Illinois could not cause Bellas Hess to collect taxes on sales in the state unless they had a "nexus" (physical presence) in the state.