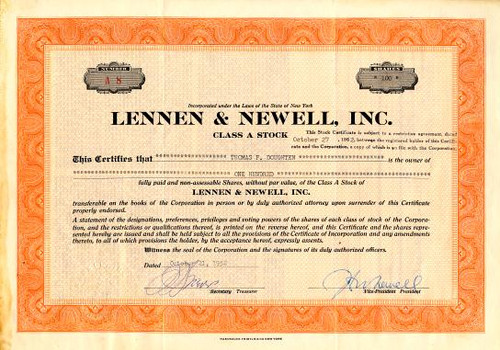 Beautifully engraved RARE certificate from the Lennen & Newell, Inc issued in 1952. This historic document was printed by Hassbrouck Thistle & Co and has an ornate border around it with the company's name on top center. This item is hand signed by the Company's President and Co-Founder (H. W. Newell ) and Secretary, J.J. Speirs and is over 70 years old. Lennen & Newell, Inc. was a famous large advertising agency that went out of business in the early 1972. The company was founded by H. W. Newell , Phillip W. Lenned and Adolph J. Toijo.

The agency was a pioneer first in radio advertising and then in television. Its Hall of Fame show for client Lehn & Fink brought actors John Barrymore, Joan Crawford, and Clark Gable and musician Jascha Heifetz to radio for the first time. In 1948 the agency published a report about television that told clients to “Get in or get left” but also warned that the payoff could be years away.

Lennen & Newell was ranked as the 13th largest advertising agency in the U.S. in 1970. Its sudden bankruptcy in February 1972 was the worst agency financial disaster the advertising world had ever experienced. The fallout from that event led to the overturning of the almost century-old and time honored policy of agency sole liability for payment to media, and caused a disruption in the entire client-agency-media ecosystem.