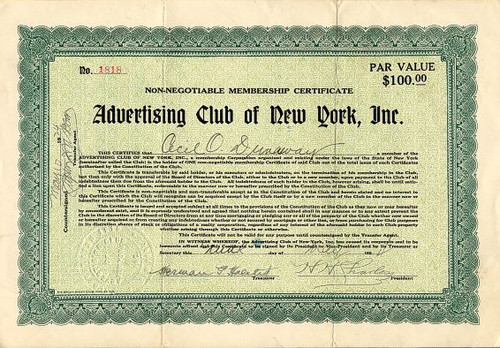 Beautiful certificate from the Advertising Club of New York, Inc. issued in 1924. This historic document was printed by the Broun - Green Company and has an ornate border around it with the company name centered on the top. This item has the signatures of the Company's President, Harry H. Charles and Treasurer, Herman J. Halsted and is over 85 years old.

The Advertising Club of New York, also known as The Ad Club and originally called the Sphinx Club, focuses efforts on advertising industry self-regulation, professional training and good fellowship. In 1896, a group of eight advertising men in New York City began meeting for lunch on a regular basis to share ideas on the business that sustained them. They called themselves the Sphinx Club, and in 1906 the growing group incorporated as the Advertising Men's League, ultimately becoming The Advertising Club of New York in 1915. Most of The Ad Club's early years were spent at the landmark Stanford White building at 23 Park Avenue, where Ad Club members, including the young Bill Paley, J.C. Penney, and Bill Bernbach, conducted business in the main dining room over lunch. 1906: The first formal course in advertising to be offered by an educational institution at New York University (NYU). 1911: The first supporter of the "truth in advertising" program, which remains a hallmark of consumer protection, and formed the first "Vigilance Committee", which evolved into today's Better Business Bureau. 1923: Held the first-ever advertising exposition at the 71st Regiment Armory to much acclaim, with an attendance of over 58,000. 1949: Founded the Advertising Hall of Fame immortalizing 10 giants of our industry the first year, and many more until it was turned over to the American Advertising Federation in 1973. 1964: Founded the International ANDY Awards to recognize creative excellence in advertising and to raise the standards of craftsmanship in industry. Harry H. Charles was also the president of the Charles Advertising Service. History from Wikipedia and OldCompany.com (old stock certificate research service).