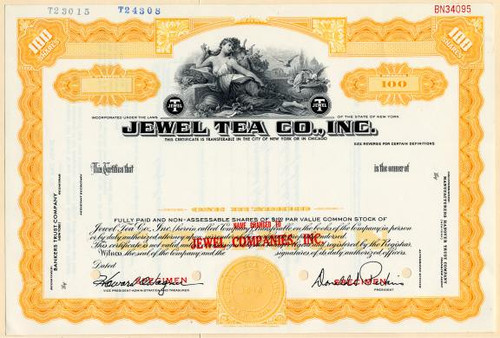 Beautifully engraved specimen certificate from the Jewel Tea Co. Inc. This historic document was printed by the Security Columbian Banknote Company and has an ornate border around it with a vignette of a woman. This item has the printed signatures of the Company's President, and Vice President.

Certificate Vignette
The Jewel Tea Company of Chicago, Illinois reached a national market for its household products using direct sales and mail order catalogs from 1901 until 1981. Around 1899 Frank V. Skiff went into the business with very little money and resources to sell freshly roasted coffee through a home deliverly service. As business developed, so did his product offerings which included teas, foods, and other home products. In 1901, his brother-in-law, Frank P. Ross, joined Skiff as a partner in the operations of the business. The company grew to over $8 Million in revenues by 1915 and delivered to over a million homes. Unfortunately, Skiff and Ross grew the business too fast and were forced out because they lost control of the operations. The company was that was founded in 1899 ceased operations in 1981. During those 82 years it had a profound effect on the American home, and also on the country during WW2, where they pioneered the C-ration for American troops and turned their factories into making goods for the war effort. In 1933, Jewel contacted Hall China Co. of East Liverpool Ohio with the idea of developing a new pattern of china to be used for a new premium program. Jewel & Hall had done business in past years with other premium offers. The partnership resulted in one of, if not the, largest & longest premium programs in the country. Autumn Leaf ran from its beginning in 1933 to its end in 1976. During that time, some 42,000,000 pieces were produced. Jewel tried a comeback of the pattern in 1978, but it never caught on again. About Specimen Certificates Specimen Certificates are actual certificates that have never been issued. They were usually kept by the printers in their permanent archives as their only example of a particular certificate. Sometimes you will see a hand stamp on the certificate that says "Do not remove from file". Specimens were also used to show prospective clients different types of certificate designs that were available. Specimen certificates are usually much scarcer than issued certificates. In fact, many times they are the only way to get a certificate for a particular company because the issued certificates were redeemed and destroyed. In a few instances, Specimen certificates were made for a company but were never used because a different design was chosen by the company. These certificates are normally stamped "Specimen" or they have small holes spelling the word specimen. Most of the time they don't have a serial number, or they have a serial number of 00000. This is an exciting sector of the hobby that has grown in popularity over the past several years.