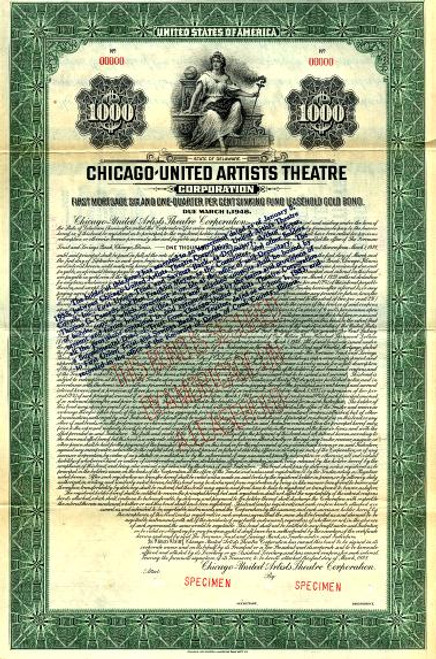 Beautiful engraved specimen certificate from the Chicago-United Artists Theatre dated in 1928. This historic document was printed by American Bank Note Company and has an ornate border around it with a vignette of an allegorical woman. This item is over 88 years old. Professionally reinforced. 38 coupons attached on top. 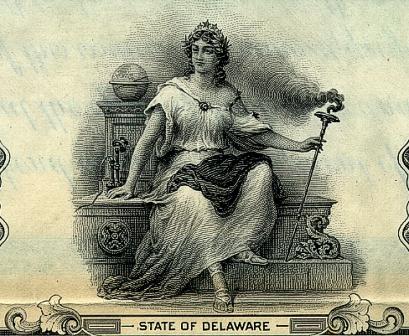 Certificate Vignette
The United Artists Theatre was a popular movie theatre located in the Chicago Loop. It was originally built as a live theater venue called the Apollo, then later turned into a cinema. It was demolished in 1989. The Apollo Theatre was constructed in 1921 by theatrical producer A. H. Woods, who also owned the nearby Woods Theatre. It was located on Randolph Street, which was once known as Chicago's Great White Way and continues to be the center of Chicago's theater district. Designed by the architectural firm of Holabird and Roche, the theater was notable for its incorporation of elements of the Greek Revival style. The building was purchased by the Balaban and Katz cinema chain and renamed in 1927. It was later operated by ABC/Great States and Cineplex Odeon. The theater featured ornate interior design common of the movie palaces of its era. It was known for showing exclusive runs and premieres of top Hollywood films. In the 1970s, the theater focused mostly on the action and horror films popular at the time, with the occasional blockbuster, such as the house-record breaking run of Jaws. From the 1950s until its closing, the theater featured an elaborate marquee, which wrapped around the building's curved corner entrance. This marquee can be seen in many films including The Blues Brothers, Adventures in Babysitting, and Ferris Bueller's Day Off. About Specimens Specimen Certificates are actual certificates that have never been issued. They were usually kept by the printers in their permanent archives as their only example of a particular certificate. Sometimes you will see a hand stamp on the certificate that says "Do not remove from file". Specimens were also used to show prospective clients different types of certificate designs that were available. Specimen certificates are usually much scarcer than issued certificates. In fact, many times they are the only way to get a certificate for a particular company because the issued certificates were redeemed and destroyed. In a few instances, Specimen certificates we made for a company but were never used because a different design was chosen by the company. These certificates are normally stamped "Specimen" or they have small holes spelling the word specimen. Most of the time they don't have a serial number, or they have a serial number of 00000. This is an exciting sector of the hobby that grown in popularity over the past several years.