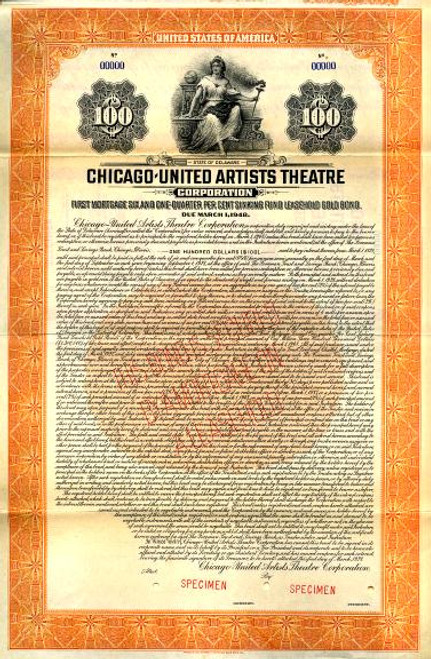 Beautiful engraved specimen certificate from the Chicago-United Artists Theatre Corporation dated in 1928. This historic document was printed by American Bank Note Company and has an ornate border around it with a vignette of an allegorical. This item has the printed signatures of the Company's President and Secretary and is over 88 years old. 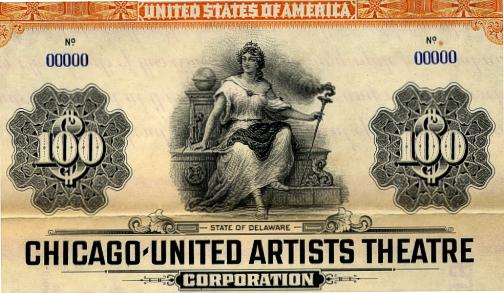 Certificate Vignette
United Artists Theater 45 West Randolph Street Built 1921 Architects: Holabird & Roche The United Artists Theater was one of several large movie theaters that helped make the Loop the city's premier entertainment district. Located on at the southeast corner of Randolph and Dearborn Streets, the theater and its first-run movies attracted patrons from across the city. Chicago's United Artists Theater began as the Apollo Theater. The Apollo opened in 1921. For the next five years, it operated as a legitimate playhouse. In 1927, however, Woods sold the theater to the United Artists Corporation, a motion-picture production and distribution company recently formed by leading Hollywood actors Mary Pickford, Douglas Fairbanks, Charlie Chaplin, and Chicago's Gloria Swanson. On December 26, 1927, the new United Artists Theater opened for business, showing "The Dove" with Norma Talmadge and Noah Beery. In later years, control of the United Artists Theater passed from its namesake corporation to the Balaban and Katz chain, which eventually became part of Plitt Theaters. Plitt operated the theater during the 1980s. In 1985, Cineplex-Odeon acquired Plitt Theaters and took over operation of the United Artists. Two years later, with the redevelopment plan gaining steam, Cineplex-Odeon closed the theater. The last day of business was 19 November 1987. In 1989, the United Artists Theater and most of the adjacent properties were demolished by the city. History from Wikipedia and OldCompanyResearch.com. About Specimens Specimen Certificates are actual certificates that have never been issued. They were usually kept by the printers in their permanent archives as their only example of a particular certificate. Sometimes you will see a hand stamp on the certificate that says "Do not remove from file". Specimens were also used to show prospective clients different types of certificate designs that were available. Specimen certificates are usually much scarcer than issued certificates. In fact, many times they are the only way to get a certificate for a particular company because the issued certificates were redeemed and destroyed. In a few instances, Specimen certificates we made for a company but were never used because a different design was chosen by the company. These certificates are normally stamped "Specimen" or they have small holes spelling the word specimen. Most of the time they don't have a serial number, or they have a serial number of 00000. This is an exciting sector of the hobby that grown in popularity over the past several years.