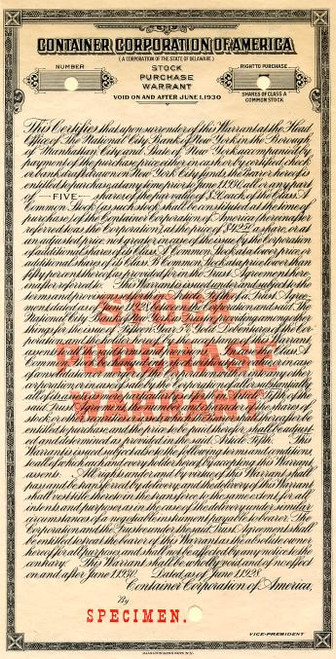 Beautifully engraved SPECIMEN Stock Purchase Warrant Certificate from the Container Corporation of America dated 1928. This historic document was printed by the Hamilton Bank Note Company and has an ornate border around it with the company's name on top center. This item is over 77 years old. Smurfit-Stone is the largest integrated producer of paperboard and paper packaging products in the world with over 260 facilities worldwide and over 37,000 employees. The company was formed as the result of a merger in 1998 between Jefferson Smurfit Corporation and Stone Container Corporation. Smurfit-Stone operates two divisions: containerboard and corrugated containers; and consumer packaging, which includes folding cartons, flexible packaging and specialty packaging. It is also one of the world's largest paper recycling companies. In 2003 the company sold its European operations to Jefferson Smurfit. History of Smurfit-Stone · Jefferson Smurfit Group founded in Dublin, Ireland in 1935 · JS Group establishes a presence in the United States with its purchase of Alton Box and Diamond International 1981. · In 1983 JS Group reorganizes its operations in the U.S. and becomes Jefferson Smurfit Corporation. · JS Corporation acquires 50% of Container Corporation of America with the other 50% owned by Morgan Stanley Leveraged Equity Fund · JSC reorganizes as a private company in 1989, 50% owned by JS Group and 50% owned by Morgan Stanley · In 1994 jefferson Smurfit Corporation becomes a publicly traded company · J.H. Stone & Company founded in Chicago in 1926 · The company incorporates as Stone Container Corporation in 1945 · Stone Container expands, buying plants in Pennsylvania, Ohio, Indiana and Michigan · Stone Container expands enormously by acquiring 20 plants from Continental Group in 1983 and 50 plants from Champion International in 1986 · In the 1990s Stone Container expands into Latin America, Asia and Europe · Jefferson Smurfit Corporation and Stone Container Corporation merge in 1998 · May 2000 Smurfit-Stone acquires St. Laurent paperboard · 2002 Company purchases container plants and timberland from MeadWestvaco · 2003 Jefferson Smurfit distributes its remaining shares (29%) to JSC shareholders. Smurfit Stone sells its European operations to Jefferson Smurfit Board of Directors About Specimens Specimen Certificates are actual certificates that have never been issued. They were usually kept by the printers in their permanent archives as their only example of a particular certificate. Sometimes you will see a hand stamp on the certificate that says "Do not remove from file". Specimens were also used to show prospective clients different types of certificate designs that were available. Specimen certificates are usually much scarcer than issued certificates. In fact, many times they are the only way to get a certificate for a particular company because the issued certificates were redeemed and destroyed. In a few instances, Specimen certificates were made for a company but were never used because a different design was chosen by the company. These certificates are normally stamped "Specimen" or they have small holes spelling the word specimen. Most of the time they don't have a serial number, or they have a serial number of 00000. This is an exciting sector of the hobby that has grown in popularity over the past several years. History from company press information.