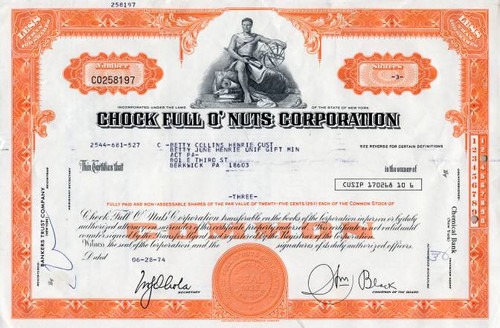 Beautiful uncancelled stock certificate from the Chock Full O' Nuts Corporation issued in 1974. This historic document was printed by the Security-Columbian Banknote Company and has an ornate border around it with a vignette of an allegorical figure. This item has the printed signatures of the Company's Chairman of the Board, William Black and Secretary, and is over 46 years old.

Certificate Vignette
Chock full o'Nuts is a brand of coffee spawned by a chain of New York City coffee shops. Its unusual name derives from the eighteen shelled nut shops founder William Black had established under that banner in the city beginning in 1926. When the Depression struck he converted them to lunch counters serving a cup of coffee and a sandwich for a nickel. In time the brand grew popular, being introduced to the consumer market through grocery stores starting in 1953. Today it is owned by coffee giant Massimo Zanetti Beverage Group, the largest privately held firm in the industry. The chain was founded by William Black (18981983), an American immigrant who sold nuts in Times Square to theater-goers. In 1926, he opened a store on Broadway and 43rd Street, eventually adding seventeen more. When the Depression settled in, New Yorkers could no longer afford the luxury of shelled nuts, so Black converted his shops into lunch counters, selling coffee and sandwiches. Their signature "nutted cheese" sandwich, made of cream cheese and chopped nuts on dark raisin bread, cost a nickel, with a cup of coffee, when the company was founded. When coffee prices went up in the 1950s, Black, like other restaurateurs, held to a 5-cent cup of coffee by watering it down. But he soon broke ranks and raised the price, announcing that he refused to compromise on quality. In 1953, the coffee brand was introduced to supermarkets. Several years later baseball star Jackie Robinson became the company's vice president and director of personnel, after retiring from the game. In 1961, Chock full o'Nuts introduced a brand of instant coffee. Within that decade the chain had approximately 80 restaurants in the New York City area. Hygiene was a selling point, with the sandwiches advertised as "untouched by human hands". Cooks used tongs to assemble them. In the 1970s, the lunch counters gradually closed. About this time, with Black increasingly advanced in age, Steinfield, a major real estate operator in New York City who wanted the property that the restaurants occupied, declared war on Chock Full. He stated that when he won his actions he would close the restaurants. After Black died, the company sold its remaining 17 restaurants to the restaurant company Riese Bros. In 1988, investor Martin D. Gruss and companies he controlled purchased a 10-percent stake in the Chock full o'Nuts Corporation, saying he might seek control of the company. In 1993, Chock Express stores were introduced. The Sara Lee Corporation purchased Chock full o'Nuts for $238 million in 1999. In May 2006, it was purchased from Sara Lee by Massimo Zanetti Beverage USA, along with the MJB, Hills Bros., and Chase & Sanborn coffee brands. On September 10, 2010, the company announced it was returning to the lunch counter business by opening its first store in almost 30 years, on West 23rd Street between Broadway and 6th Avenue in Manhattan. The company said it planned to add stores and kiosks in New York City serving the "nutted cheese" sandwich and other traditional Chock full O' Nuts menu items (plus new choices). To assure those with allergies to nuts, the company began adding the slogan "NO NUTS! 100 % Coffee" to its packaging in the 2000s. The Chock Full o'Nuts advertising jingle on a building in New York City. Note the altered lyrics. The Chock full o' Nuts advertising jingle was based on the song, "That Heavenly Feeling", written by Wayne and Bruce Silbert. Sung by company founder William Black's wife, cabaret singer Page Morton Black, it received extensive airplay on both radio and television in the 1950s and 1960s. The original lyrics went: Chock full o'Nuts is that heavenly coffee, Heavenly coffee, heavenly coffee. Chock full o'Nuts is that heavenly coffee, Better coffee Rockefeller's money can't buy. However, the company had to alter the lyrics from "Rockefeller's money" to "a millionaire's money" after being sued by New York governor Nelson Rockefeller, who owned coffee interests in Latin America. Mid-2000s versions of the jingle replace "millionaire" with "billionaire." History from Wikipedia and OldCompany.com (old stock certificate research service)