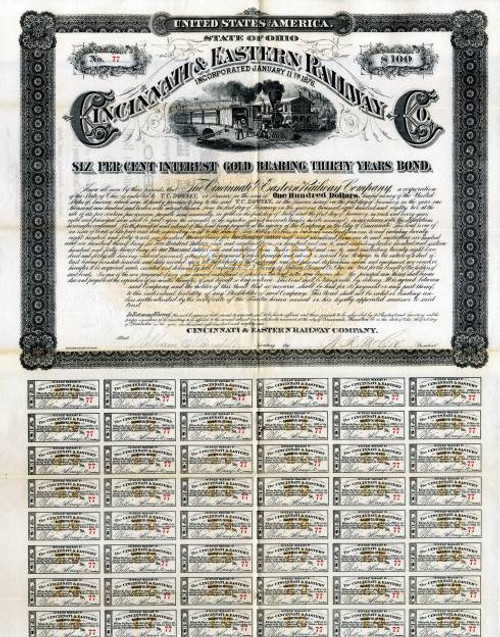 Beautiful certificate from the Cincinnati & Eastern Railway Company printed as early as 1886. This historic document was printed by the Strobridge & Company and has an ornate border around it with a vignette of a steam locomotive and a switchman beside train at train depot. This item has the origianl signatures of the Company's President, and Secretary, and is over 125 years old. Black with yellow over print. Coupons attached. Uncancelled and extremely fine

Certificate Vignette
Near Avondale, two narrow gauge lines were projected connect. The first was the Cincinnati & Eastern Railway (C&E), which was incorporated on January 11, 1876 to connect Cincinnati to Portsmouth.(2b) It was projected to connect to the Jackson County coal fields. In May 1876, the C&E began construction and by the following year, the company had 50 miles of track on-line. The western terminus was at Batavia Junction on the Little Miami Railroad, although it later constructed a 5.5-mile western extension to the Miami Valley at Avondale. The other narrow gauge railroad was the Cincinnati, Avondale, Glendale and Hamilton Railway. Incorporated on November 10, 1876, the company was organized by a group of residents from Hamilton, Sharon and Reading to service their respective communities. The company never began construction of the route to Hamilton.(2b