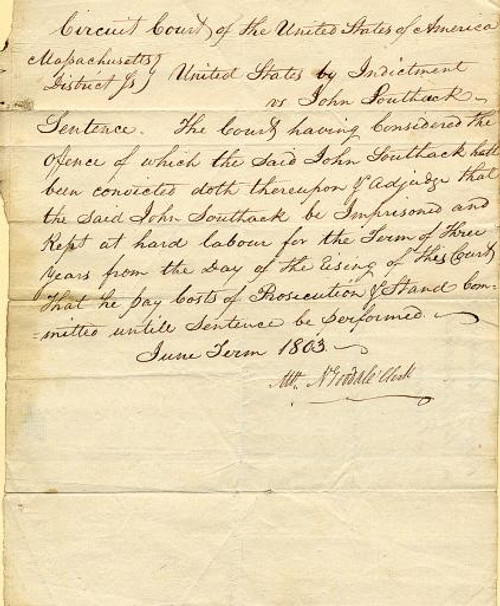 United States Circuit Court of Massachusetts sentence of John Southack for being been convicted and will be commited to imprisonment and hard labor.....signed by Nathan Goodale as Circuit Clerk. 7 1/4" x 9" XF. John Southack was sent to prison for scuttling a ship and insurance fraud.....Southack was important in the prison reform movement, having published his diary, The Life of John Southack (n.p., 1809). The unpublished diary of an anonymous Charlestown prisoner ...which shed light on the poor conditions of the Charlestown State Prison. Over 204 years old. Nathan Goodale, loyalist, born in Salem, Massachusetts, in 1741: died in Newton, Massachusetts, in 1806. He was graduated at Harvard in 1759, and was one of the loyalists that signed the address approving Governor Hutchinson's course in 1774, but recanted. He also signed a similar address to General Gage. Early in 1775 he retired to Nantucket, and after the organization of the Federal government he was clerk of the United States courts in Massachusetts.

homestore.com with Stuart Wolff as president ( Wolff got 15-Year Sentence for fraud)