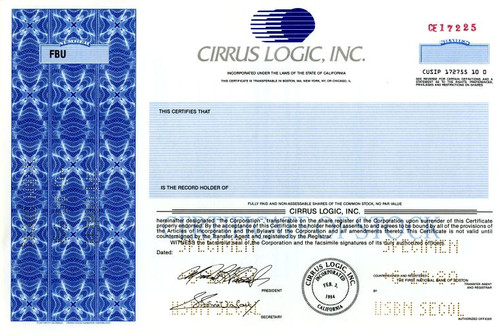 Beautifully engraved specimen certificate from the Cirrus Logic, Inc. printed in 1989. This historic document was printed by the Security Columbian Banknote Company and has a block border with a vignette of the company's logo. This item has the printed signatures of the Company's officers. 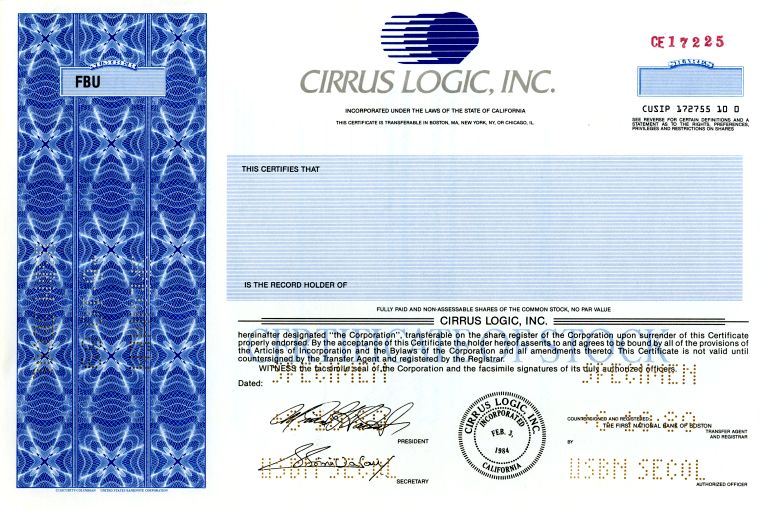 Certificate
Cirrus Logic Inc. is a fabless semiconductor supplier that specializes in analog, mixed-signal, and audio DSP integrated circuits (ICs).[2] As of 2015 Cirrus Logic has its headquarters in Austin, Texas.[2][3] The company's audio processors and audio converters feature in many professional audio and consumer entertainment products, including smartphones, tablets, portable media players, automotive entertainment systems, home-theater receivers, televisions and docking stations. Cirrus Logic's analog mixed-signal converter chips are also used in a wide variety of energy-related applications, including its new line of LED controllers for the incandescent light-bulb replacement market, as well as energy-measurement chips for applications such as digital utility meters. Dr. Suhas Patil founded the company as "Patil Systems, Inc." in Salt Lake City in 1981; it adopted the name "Cirrus Logic" when it moved to Silicon Valley in 1984. Cirrus Logic has more than 1,000 patents and more than 600 products serving more than 2,500 end-customers globally. History from Wikipedia, Encyberpedia and OldCompany.com (old stock certificate research service) About Specimen Certificates Specimen Certificates are actual certificates that have never been issued. They were usually kept by the printers in their permanent archives as their only example of a particular certificate. Sometimes you will see a hand stamp on the certificate that says "Do not remove from file". Specimens were also used to show prospective clients different types of certificate designs that were available. Specimen certificates are usually much scarcer than issued certificates. In fact, many times they are the only way to get a certificate for a particular company because the issued certificates were redeemed and destroyed. In a few instances, Specimen certificates were made for a company but were never used because a different design was chosen by the company. These certificates are normally stamped "Specimen" or they have small holes spelling the word specimen. Most of the time they don't have a serial number, or they have a serial number of 00000. This is an exciting sector of the hobby that has grown in popularity over the past several years.