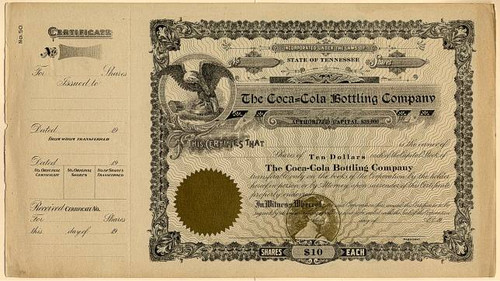 Beautiful RARE unissued certificate from the Coca Cola Bottling Company. The company was incorporated in the State of Tennessee in 1899. The company's authorized capital was $25,000. This historic document was printed by the Goes Company and has an ornate border around it with a vignette of an eagle on top and Lady Liberty on the bottom. This item is over 100 years old.

Certificate Vignette
On July 21, 1899, Chattanooga attorneys Benjamin F. Thomas and Joseph B. Whitehead signed an agreement with Asa Candler, president of the Coca-Cola Company, to receive exclusive rights to bottle the soft drink throughout most of the United States. Fellow Chattanooga attorney John T. Lupton soon became the third partner to help finance the first bottling plant in Chattanooga. By September 1899 the plant had opened at 17 Market Street, and the first advertisement appeared offering the soft drink in bottles. The venture took "Coke" from the southern drugstore counter and made it a national and international drink. The Coca-Cola Bottling Company, parent bottling company to all others, was chartered in Tennessee on November 30, 1899. At the December inaugural meeting of the company directors, Whitehead was selected as the first president, Lupton as vice-president, and Thomas, secretary-treasurer. In this latter role, Thomas oversaw the business on a day-to-day basis. Early in 1900 Whitehead moved to Atlanta to open a second bottling plant. Within months, it had become apparent to the partners that they needed a franchise system to expand as rapidly as the contract with Candler required. They decided to split the territory between them. Thomas received control of most of the eastern United States, from Chattanooga north, plus California, Oregon, and Washington. Whitehead and Lupton shared control of the rest of the country, primarily in the South and West. Each partner established "parent" bottlers who granted franchises to local bottlers in their territory. Thomas's company, rechartered in 1900 as Coca-Cola Bottling Company, kept its headquarters in Chattanooga. In 1902 Thomas sold the Chattanooga bottling plant in order to concentrate on franchise development. This, the first franchised Coca-Cola bottler in the world, still operates as the Chattanooga Coca-Cola Bottling Company. Hereafter, the parent bottling companies did not actually bottle anything but acted as middlemen, buying syrup from the Atlanta Coca-Cola Company and selling it to the franchise bottlers in their territory. By the 1950s there were some eleven hundred franchises descended from the parent bottlers. Beginning in the 1920s, the Coca-Cola Company began a long and expensive process of buying back all the bottling franchise rights Candler had sold in 1899 for one dollar. The corporation repurchased Coca-Cola Bottling Company (Thomas) in 1974 and the Lupton interests in 1986. Tennessee Historical Society and the University of Tennessee Press