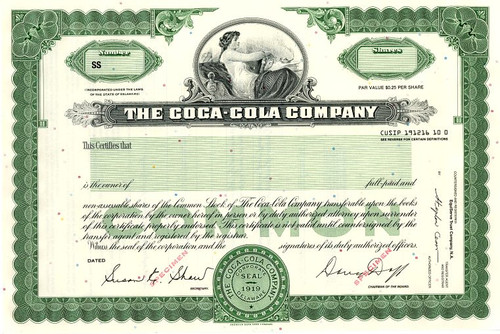 Beautifully engraved specimen stock certificate from the Coca-Cola Company printed in 2000. This historic document was printed by the American Bank Note Company and has an ornate border around it with a vignette of an allegorical woman leaning back and holding a closed book. This item has the printed signatures of the Company's Chairman, Douglas N. Daft and Secretary. 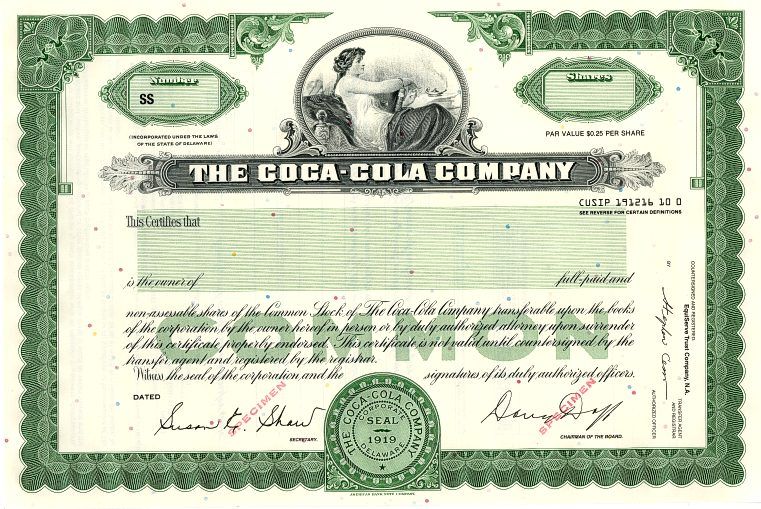 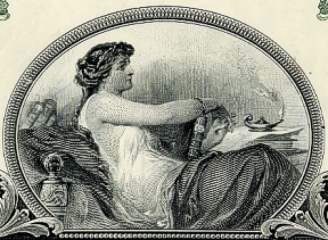 Certificate Vignette
History of Coca Cola In 1886 Dr. John Stith Pemberton first introduces Coca-Cola in Atlanta, Georgia. The pharmacist concocted a caramel-colored syrup in a three-legged brass kettle in his backyard. He first "distributes" Coca-Cola by carrying it in a jug down the street to Jacobs' Pharmacy. For five cents, consumers can enjoy a glass of Coca-Cola at the soda fountain. This year, sales of Coca-Cola average nine drinks per day. In 1891 Atlanta entrepreneur Asa G. Candler acquires complete ownership of the Coca-Cola business for $2,300. Within four years, his merchandising flair helps expand consumption of Coca-Cola to every part of the nation. By 1914, Candler had acquired a fortune of some $50 million. Baseball hall of famer Ty Cobb, a Georgia native, was another early investor in the company. In 1893 The trademark "Coca-Cola" name and script are registered with the U.S. Patent and Trademark Office. Dr. Pemberton's partner and bookkeeper, Frank M. Robinson, suggested the name and penned "Coca-Cola" in the unique flowing script that is famous worldwide today. Mr. Robinson thought "the two C's would look well in advertising." Coca-Cola" was first sold for 5¢ a glass as a soda fountain drink at Jacob's Pharmacy in Atlanta, Georgia. In 1894, Joseph A. Biedenharn, owner of the Biedenharn Candy Company in Vicksburg, Mississippi, first bottled "Coca Cola." By 1903, the use of cocaine was controversial and "Coca-Cola" decided to use only "spent coca leaves." It also stopped advertising "Coca-Cola" as a cure for headaches and other ills. In 1929, after his death, Griggs Candler's family sold the interest in "Coca-Cola" to a group of businessmen led by Ernest Woodruff for $25 million. Woodruff was appointed president of "Coca-Cola" on April 28, 1923 and stayed on the job until 1955. History from OldCompany.com and SavingsBonds.pro (collectible Savings Bonds website) About Specimen Certificates Specimen Certificates are actual certificates that have never been issued. They were usually kept by the printers in their permanent archives as their only example of a particular certificate. Sometimes you will see a hand stamp on the certificate that says "Do not remove from file". Specimens were also used to show prospective clients different types of certificate designs that were available. Specimen certificates are usually much scarcer than issued certificates. In fact, many times they are the only way to get a certificate for a particular company because the issued certificates were redeemed and destroyed. In a few instances, Specimen certificates were made for a company but were never used because a different design was chosen by the company. These certificates are normally stamped "Specimen" or they have small holes spelling the word specimen. Most of the time they don't have a serial number, or they have a serial number of 00000.