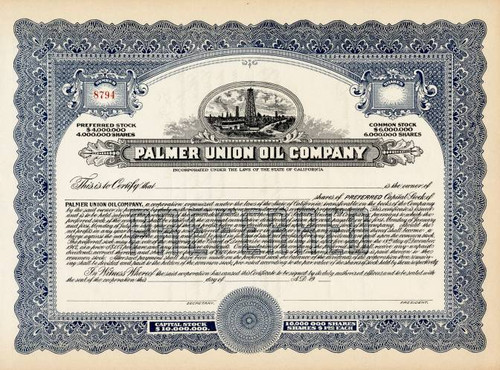 Beautiful unissued certificate from the Palmer Union Oil Company printed around 1920. This historic document has an ornate border around it with a vignette of an oil derrick.

Certificate Vignette
[WASHINGTON, DC (May 7, 2012) - Scripophily.com's Old Company Research Business has skyrocketed after Reuters News Service reported a lawsuit regarding stock from Palmer Union Oil Company which ended up turning into Coca-Cola. Our company was notified by of Reuters News Service that one of the filings made in March 2012, included the old company research report performed by our company, OldCompany.com, in 2009. In our research report, we showed the history of the Palmer Union Oil Company which turned into long-forgotten companies such as Palmer Stendel Oil Corporation, Petrocarbon Chemicals Inc and ultimately Taylor Wine Company Inc. and ended up merging into Coca Cola Co. on 1/21/77. As a result of this story, Bob Kerstein, founder of Scripophily.com / Old Company Research, was featured on the "Today Show" and "Inside Edition" as a Stock Certificate Expert. In this particular case, Kerstein believed that the Palmer Union Oil Company stock only had value as a collectible and not a redeemable security. Factors considered in this determination included the method in which the stock was acquired, issued and endorsed, the number of reverse stock splits and capital changes, statute of limitations issues, requirements of escheating property over to government, and the cancellation of the certificate. As a result of this story, there has been renewed interest in people having old company stock and bond research performed to determine whether or not old stock certificates in their possession have possible value as a collectible or a redeemable security. Scripophily.com's Old Company Research Service provides services for individuals, banks, attorneys, estates and trusts detailing the company's history regarding name changes, mergers, bankruptcies, and predecessor and successor companies. If the company did survive, OldCompany.com will provide contact information so a determination can be made as to whether the securities have any market value.