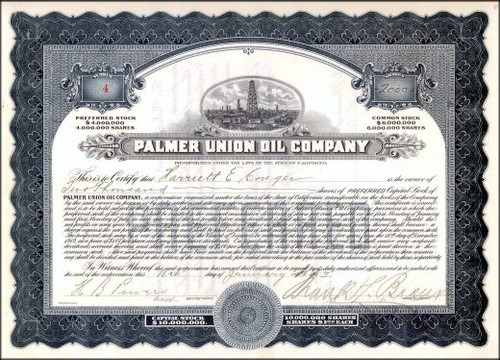 Beautifully engraved certificate from the Palmer Union Oil Company issued in 1913. This historic document has an ornate border around it with a vignette of an oil field. This item is hand signed by the Company's President and Secretary and is over 89 years old. 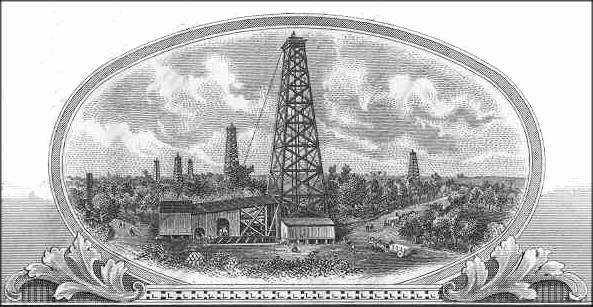 (Reuters) - George Soros and John Paulson may have to make room for the late Tony Marohn, who possibly pulled off one of the greatest financial trades ever -- at an estate sale.

Marohn traced Palmer Union Oil to Coca-Cola, by way of long-forgotten companies such as Petrocarbon Chemicals Inc and Taylor Wine Co, according to court documents.

Marohn died in 2010, and but his family in California has taken on the legal battle with Coca-Cola Co, saying it is entitled to about 1.8 million shares of the soft-drink maker.

But before the family buys that vacation home in Aspen, they'll have to convince a skeptical Delaware Chancery Court judge that the law is on their side.

"This is a new version of the Beverly Hillbillies," Judge Leo Strine said at a hearing on January 31, according to a court transcript. He was referring to a 1960s television comedy about a backwoods family that becomes rich by finding oil on their property.

If upheld, Marohn's estate would become among the largest non-institutional investors in Coca-Cola, according to Reuters data.

"The claim of Mr. Marohn's estate that it is entitled to millions of dollars in Coca-Cola stock - based on a canceled stock certificate for a long-defunct oil company purchased at an estate sale - is meritless and unfair to the Company's millions of legitimate shareholders," said a Thursday statement from Coca-Cola.

Bob Kerstein, who runs the scripophily.com website, which researches and sells antique stock certificates, said he gets lots of inquiries from people who want to redeem old certificates.

"We get people who have blank stock certificates and they think they have hit the lotto," said Kerstein. He said he has to break the news to them they need to be on record with the company as well.

Margules, the Wilmington, Delaware, attorney for Marohn's estate, said he thinks he can persuade Strine that the law favors his client. Marohn's certificate was endorsed and assigned, but the transferee was left blank.

Marohn filled in his name and began digging through corporate records. He eventually wrote to Coca-Cola to demand 1.8 million shares of common stock for his 1,625 Palmer Union Oil shares.

The company refused, and sued Marohn in Delaware's Chancery Court in 2009 seeking a declaration he was not entitled to the company's stock.

Marohn's estate filed papers last week showing courts have upheld that a person who was issued a stock certificate and then endorsed and assigned it -- but left blank the name of the transferee -- essentially transformed the certificate into a bearer stock. By writing his name on the stock, Marohn became the legal owner, his estate argued.

Strine said in January he would soon decide how to proceed. He also warned the Marohn estate against pursuing "a drive by of a public company" to extract money to drop the case.

"It's just not a sport," Strine said.

The case is In Re Shares of Common Stock of the Coca-Cola Company, Delaware Chancery Court, No. 5156.