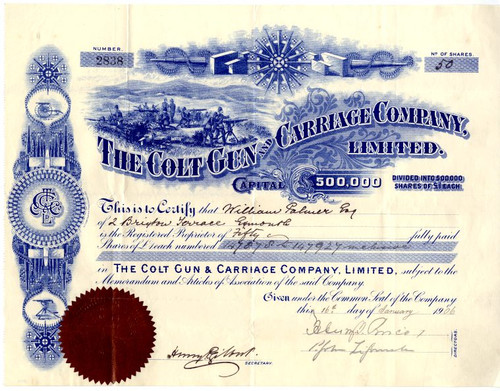 Beautifully engraved certificate from the Colt Gun and Carriage Company, Ltd. issued in 1906. Colt Gun & Carriage Co. 50 Shares issued to William palmer, Esquire with vignettes of Soldiers, machine guns & ammunition,also a large embossed gold seal (customary folds otherwise VF). Colt Gun & Carriage Co. was registered in London in 1899 to acquire patent rights of the Colt automatic gun etc. This item is hand signed by the company's directors and secretary, and is over 115 years old. Vignettes don't get much better than this. 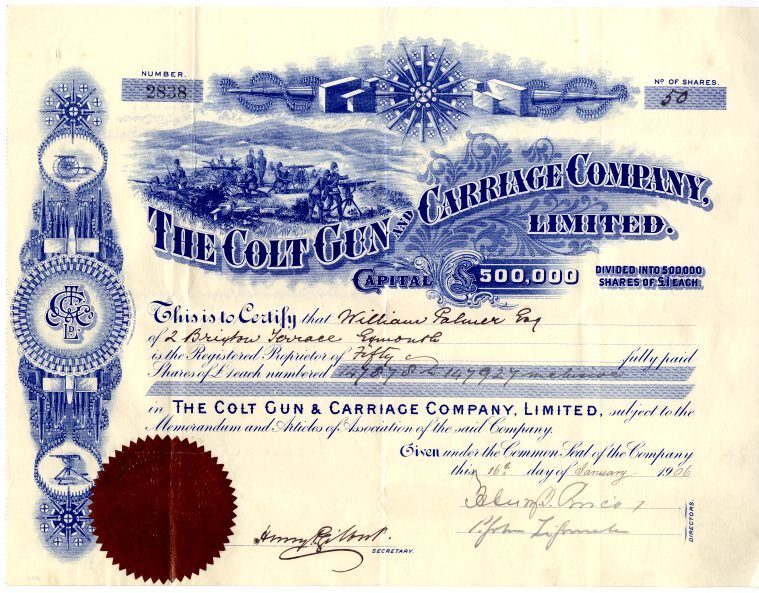 Certificate
This certificate is very hard to find and would look terrific framed. Founded in 1899 by senior British military officials. The company acquired the patents for the Colt cannon and the Dundonald machine gun in Great Britain and Europe. "Colt's Patent Fire Arms Manufacturing Co." has been producing in Hartfort / Connecticut since 1855. the famous Colt of the inventor Samuel Colt. COLT GUN AND CARRIAGE COMPANY, LIMITED, 1902 shareholder meeting minutes: An ordinary general meeting of the shareholders in the Colt Gun and Carriage Company, Limited, was held on the 17th instant at the Westminster Palace Hotel, London, Mr R. Eirnondson presiding. Thc secretary (.\Ir W. H. Fcrnie) having read the notice convening the meeting, The Chairman referred to the retirement of the Earl of \Wstmorland as chairman, and said that it fell to the lot of General Sir Seymour Blane to occupy his lordship's position, as he had previously held the office of deputy-chairman. Sir Seymour Blane was, however, stricken with a fit last Saturday, and was now confined to his room. He himself had been suddenly called upon to preside, but Sir Seymour Blane and he had been so closely associated for some weeks that their ideas and convictions respecting the company were identical. The board had passed through a long and anxious time. The history of explosives and of weapons of destruction was an interesting one, and in nearly every case the work of the inventor or his representatives had been met with determined opposition. The Colt gun was used by the Government of the United States after the severest tests, and in rivalry with all existing guns of the same kind, but when the company introduced it the English Government had already issued contracts for large supplies of other guns, and the directors had, therefore, had to take the opportunity afforded by the operations in South Africa. to demonstrate the merits of the weapon in actual warfare. In connection with the gun the company possessed a valuable asset in the patents of Lord Dundonald for his galloping gun-carriage The directors looked for a considerable business in the future not only from the gun-carriage, but also from the service carts which they had supplied. When the war in South Africa broke out a depot of the company was established with all speed in Cape Town, and the directors dispatched experts to instruct the troops in handling the gun. The Commander in Chief in South Africa appointed their representative, Lieutenant Ward, to the position of Inspector of Colt guns, and attached him to Army headquarters with the rank of Stafi Captain. It might be argued that such a concession as this would lead to the sale of a large number of Colt guns, but so far none had been purchased beyond the 57 which had been in use from the commencement of the war. Up to November 15th last the gross amount of the company's sales was nearly £40,000--not a small figure, but not as large as the directors had expected. Since that date the ordnance department in South Africa had been continually making requisitions on the company's Cape Town depot for considerable quantities of new parts, barrels, and accessories. The value of a business such as theirs must not be estimated by the absence or presence of a dividend in the first instance; the directors believed that the company would reap a reward in the future which would amply compensate the shareholders for their patience during the last two years. It would be remembered that in the prospectus it was stated that the company would not establish works of their own, but would employ English manufacturers, and this course was now being pursued. As regarded foreign Governments, the board had reason to state that before long they would have entered into terms with at least two, if not three, Powers for the use of the Colt gun. Several additions to the patents had been acquired, and these made the original grants more valuable, and extended the period of the company's monopoly. Their engineers and technical advisers had devised suitable means or firing blank ammunition, while a new departure had been made in designing a side-operating gear, which protected the gunner from the enemy's fire, and a cyclecarriage suitable for infantry cycle corps had also been completed. The directors had much information which they were anxious to impart to the shareholders regarding negotiations and other matters now proceeding, but for many reasons it would be impolitic and detrimental to the company's interests to publish it on the present occasion. They would, however, be pleased to receive at the office any of the larger, disinterested shareholders, to whom in strict confidence they would give all the information in their power as to these or any other matters connected with the company's business. A meeting called by some of the largest shareholders had been held, and the directors were invited to attend it, but they came to the conclusion that it would not have been wise to give any information to these who convened that meeting before giving it to the general body of shareholders. In conclusion, the chairman proposed the adoption of the report and accounts.