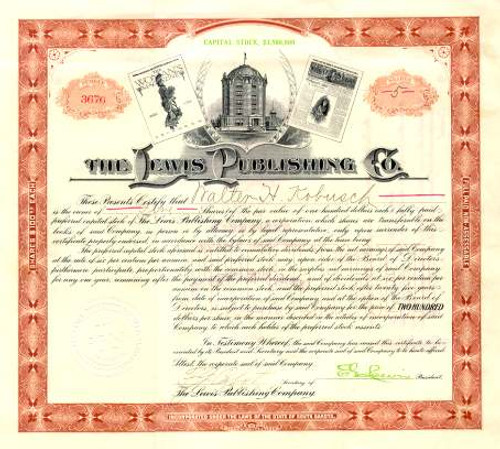 Beautifully engraved Certificate from the The Lewis Publishing Company issued in 1906. This historic document has an ornate border around it with a vignette of the company building and two of their magazines, The Woman's Magazine and Woman's Farm Journal. This item is hand signed by Ed Lewis and is over 97 years old. Edward Gardner Lewis, St. Louis promoter- publisher, whose owned two periodicals, Woman's Magazine and Woman's Farm Journal. He was denied second- class mailing privileges by the U.S. Post Office on grounds of the questionable business practices of the publisher. Postmaster General George B. Courtelyou, (a Roosevelt Favorite), had a two year attack on Edward Lewis when he published his two mail - order journals "The Woman's Magazine" and "The Woman's Farm Journal" for defrauding the Post office by using the magazine rate when they were advertisements. Cortelyou blamed the Third Assistant Postmaster General Madden, head of that postal department, on this misuse of the post office. Actually Cortelyou was successfully keeping Lewis from operating his "The People's U. S. Bank" which would compete with the "Postal Money Orders." Apparently Roosevelt approved, since Cortelyou was promoted to Secretary of the Treasury in 1907.