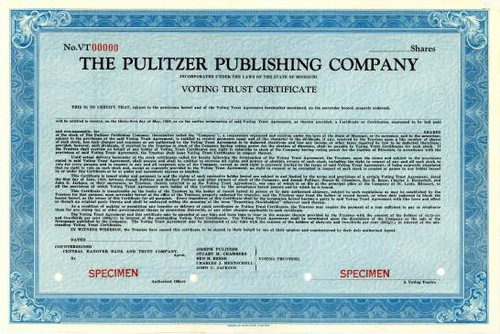 Beautifully engraved SPECIMEN certificate from the Pulitzer Publishing Company. This historic document was printed by the American Banknote Company and has an ornate border around it. Joseph Pulitzer's name is printed on the certificate as one of the voting Trustees. In the latter years of the 19th century, Joseph Pulitzer stood out as the very embodiment of American journalism. Hungarian-born, an intense indomitable figure, Pulitzer was the most skillful of newspaper publishers, a passionate crusader against dishonest government, a fierce, hawk-like competitor who did not shrink from sensationalism in circulation struggles, and a visionary who richly endowed his profession. His innovative New York World and St. Louis Post-Dispatch reshaped newspaper journalism. Pulitzer was the first to call for the training of journalists at the university level in a school of journalism. And certainly, the lasting influence of the Pulitzer Prizes on journalism, literature, music, and drama is to be attributed to his visionary acumen. In writing his 1904 will, which made provision for the establishment of the Pulitzer Prizes as an incentive to excellence, Pulitzer specified solely four awards in journalism, four in letters and drama, one for education, and four traveling scholarships. In letters, prizes were to go to an American novel, an original American play performed in New York, a book on the history of the United States, an American biography, and a history of public service by the press. But, sensitive to the dynamic progression of his society Pulitzer made provision for broad changes in the system of awards. He established an overseer advisory board and willed it "power in its discretion to suspend or to change any subject or subjects, substituting, however, others in their places, if in the judgment of the board such suspension, changes, or substitutions shall be conducive to the public good or rendered advisable by public necessities, or by reason of change of time." He also empowered the board to withhold any award where entries fell below its standards of excellence. The assignment of power to the board was such that it could also overrule the recommendations for awards made by the juries subsequently set up in each of the categories. Since the inception of the prizes in 1917, the board, later renamed the Pulitzer Prize Board, has increased the number of awards to 21 and introduced poetry, music, and photography as subjects, while adhering to the spirit of the founder's will and its intent. About Pulitzer, Inc. Pulitzer Inc. became an independent public company in March 1999 with the spin-off of the newspaper publishing and new media businesses formerly operated by Pulitzer Publishing Company. This is the 13th time the cash dividend has been increased since Pulitzer Publishing Company became a public company in 1986. Pulitzer Inc.'s newspaper operations include two major metropolitan dailies, the St. Louis Post-Dispatch and The Arizona Daily Star in Tucson, Ariz., and 11 other dailies: The Daily Herald, Provo, Utah; the Santa Maria Times, Santa Maria, Calif.; The Napa Valley Register, Napa, Calif.; The World, Coos Bay, Ore.; The Hanford Sentinel, Hanford, Calif.; the Arizona Daily Sun, Flagstaff, Ariz.; the Troy Daily News, Troy, Ohio; The Daily Chronicle, DeKalb, Ill.; The Garden Island, Lihue, Hawaii; The Daily Journal, Park Hills, Mo.; and The Daily News, Rhinelander, Wisc. Through its Pulitzer Technologies subsidiary, Pulitzer Inc. also engages in a variety of new media and interactive initiatives, including web sites related to the newspapers in St. Louis and Tucson and a number of its other dailies. Pulitzer Inc. is the successor to the company originally founded by Joseph Pulitzer in St. Louis in 1878. History is from Pulitzer Prize and Pulitzer Publishing Company news and information material.