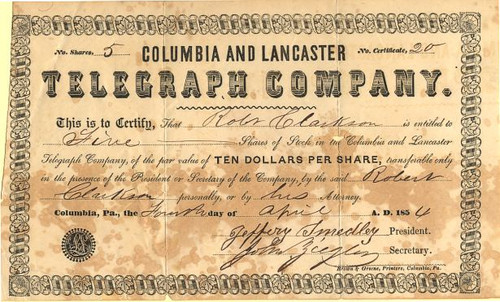 Beautiful early telegraph certificate from the Columbia and Lancaster Telegraph Company issued in 1854. This historic document was printed by Brown & Greene Printers Company and has an ornate border around it. This item has the signatures of the Company's President, Jeffrey Smedley and Secretary, John Ziegler and is over 155 years old. Crisp with light handling. Two vertical folds with splits in both approximately 1 1/2" long. A single hole as seen in the images. Patches of yellowing generally in the lower half. This is the first time we have had this certificate for sale. In the United States, the telegraph was developed by Samuel Morse and Alfred Vail. Samuel F. B. Morse independently developed an electrical telegraph in 1837, an alternative design that was capable of transmitting over long distances using poor quality wire. His assistant, Alfred Vail developed the Morse code signalling alphabet with Morse. The Morse code alphabet commonly used on the device was also named after Morse. On 6 January 1838 Morse first successfully tested the device at the Speedwell Ironworks near Morristown, New Jersey, and on 8 February he publicly demonstrated it to a scientific committee at the Franklin Institute in Philadelphia, Pennsylvania. In 1843 the U.S. Congress appropriated $30,000 to fund an experimental telegraph line from Washington, D.C. to Baltimore. By May 1, 1844 the line had been completed from the U.S. Capitol to Annapolis Junction in Maryland. That day the Whig Party nominated Henry Clay at its national convention in Baltimore. News of the nomination was hand carried by railroad to Annapolis Junction where Vail wired it to Morse in the Capitol.[8] On 24 May 1844, after the line was completed, Morse made the first public demonstration of his telegraph by sending a message from the Supreme Court Chamber in the U.S. Capitol in Washington, D.C. to the B&O Railroad "outer depot" (now the B&O Railroad Museum) in Baltimore. The famous message was: What hath God wrought (from the Biblical book of Numbers 23:23: Surely there is no enchantment against Jacob, neither is there any divination against Israel: according to this time it shall be said of Jacob and of Israel, What hath God wrought!). The Americas' first telegram, transmitted via a repeater: "What hath God wrought" sent by Samuel F.B. Morse in 1844. The Morse/Vail telegraph was quickly deployed in the following two decades. Morse failed to properly credit Vail for the powerful electromagnets used in his telegraph. The original Morse design, without the relay or the "intensity" and "quantity" electromagnets invented by Vail only worked to a distance of 40 feet (12 m). The electrical telegraph owned and built by Samuel F. B. MorseThis was a practical electrical telegraph system, and subsequently electrical telegraph came to refer to a signaling telegram - a system where an operator makes and breaks an electrical contact with a telegraph key which results in an audible signal at the other end produced by a telegraph sounder which is interpreted and transcribed by a human. Morse and Vail's first telegraphs used a pen and paper system to record the marks of the Morse Code, and interpreted the marks visually however, operators soon realized that they could "read" the clicking of the receiver directly by ear. Systems which automatically read the signals and print formed characters are generally called teletype rather than telegraph systems. Some electrical telegraphs used indicators which were read visually rather than by ear. The most notable of these was the early transatlantic telegraph cable. According to a Pennsylvania Historical and Museum Commission heritage marker installed along Pennsylvania Route 230 near Elizabethtown, Pennsylvania in 1947 (see image at right), the first commercial telegraph line in the United States ran along a railroad right-of-way (currently part of Amtrak's Keystone Corridor) between Lancaster, Pennsylvania and Harrisburg, Pennsylvania in 1845. The first message, received on January 8, 1846, was "Why don't you write, you rascals?" On 24 October 1861, the first transcontinental telegraph system was established. Spanning North America, an existing network in the eastern United States was connected to the small network in California by a link between Omaha and Carson City via Salt Lake City. The slower Pony Express system ceased operation two days later. Carson City has another claim in the history of telegraphs for the largest and costliest transmission ever sent came from there. Union sympathizers in the American Civil War were eager to gain statehood for Nevada before the next presidential election so that Abraham Lincoln would have enough votes to win. They rushed to send the entire state constitution by telegraph to the United States Congress, which approved it and sent it to the President for signature. They did not believe sending it by train would guarantee it would arrive on time. The constitution was sent on October 31, just 8 days before the election on November 7, 1864. History from Wikipedia and OldCompany.com (old stock certificate research service).