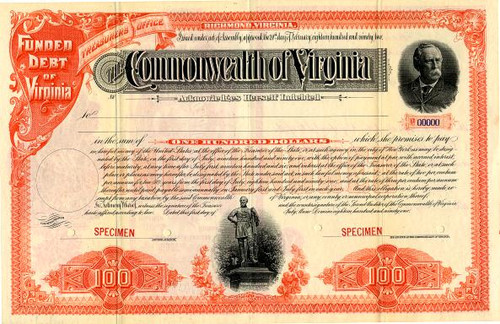 Beautiful engraved specimen certificate from the Commonwealth of Virginia dated in 1891. This historic document was printed by Homer Lee Bank Note Company and has an ornate border around it with a vignette of Governor, Philip Watkins McKinney and a statue of Thomas J. Jackson (Stonewall Jackson). This item is over 125 years old. 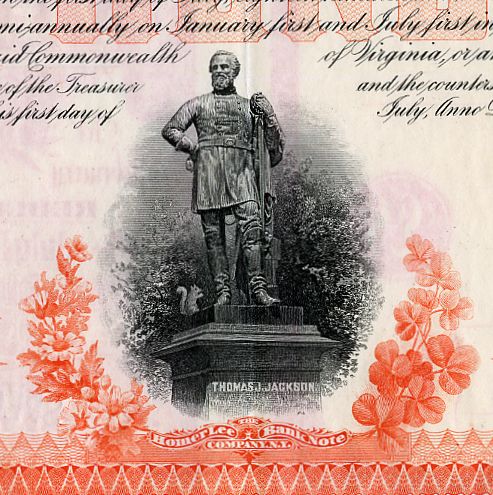 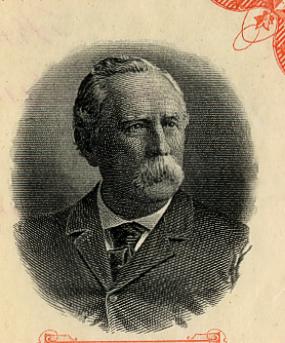 Certificate Vignette
The name "Commonwealth of Virginia" dates back to its independence from the Kingdom of Great Britain. Virginia's first constitution (adopted on June 29, 1776) directed that "Commissions and Grants shall run, In the Name of the commonwealth of Virginia, and bear test by the Governor with the Seal of the Commonwealth annexed." The Secretary of the Commonwealth still issues commissions in this manner. Among other references, the constitution furthermore dictated that criminal indictments were to conclude "against the peace and dignity of the Commonwealth". Additionally, the official title of the elected local prosecutor in each of Virginia's political subdivisions is the "Commonwealth's Attorney", as opposed to State's Attorney in other States or the more standard District Attorney. In Virginia, the term State is occasionally used in an official manner, but usually in a compound structure rather than as a stand-alone noun. This is evident in the name of the agency "Virginia State Corporation Commission" and in "Virginia State Police", and as in the name of "Virginia Polytechnic Institute and State University". The state university in Richmond is known as "Virginia Commonwealth University". There is also a "Virginia State University", located in Ettrick). History from Wikipedia and OldCompany.com (old stock certificate research service) About Specimens Specimen Certificates are actual certificates that have never been issued. They were usually kept by the printers in their permanent archives as their only example of a particular certificate. Sometimes you will see a hand stamp on the certificate that says "Do not remove from file". Specimens were also used to show prospective clients different types of certificate designs that were available. Specimen certificates are usually much scarcer than issued certificates. In fact, many times they are the only way to get a certificate for a particular company because the issued certificates were redeemed and destroyed. In a few instances, Specimen certificates we made for a company but were never used because a different design was chosen by the company. These certificates are normally stamped "Specimen" or they have small holes spelling the word specimen. Most of the time they don't have a serial number, or they have a serial number of 00000. This is an exciting sector of the hobby that grown in popularity over the past several years.