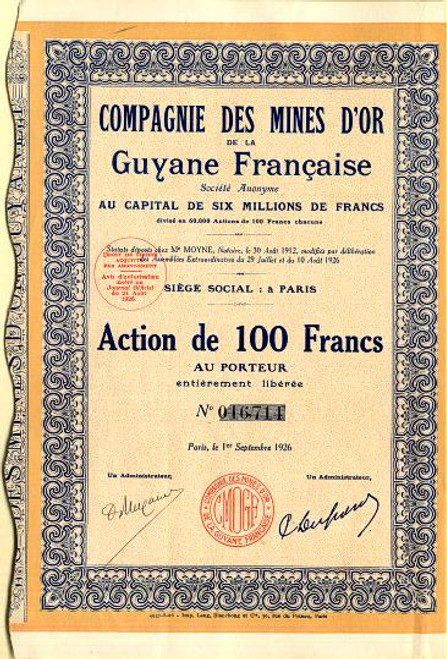 Beautiful certificate from the Compagnie Des Mines D'or De La Guyane Francaise dated in 1929. This historic document was printed by Imp Lang Blanchong and has an ornate border around it. This item has the signatures of the Company's Un administrateur's and is over 81 years old. French Guiana (French: Guyane franÃ§aise, officially Guyane) is an overseas department (French: dÃ©partement d'outre-mer, or DOM) of France, located on the northern coast of South America. Like the other DOMs, French Guiana is also an overseas region of France, one of the 26 regions of France. As a part of France, French Guiana is in the European Union, and its currency is the euro. French Guiana was originally inhabited by a number of Native American peoples. Settled by the French during the 17th century, it was the site of penal settlements from 1852 until 1951; the 1970s saw the settlement of Hmong refugees from Laos. A movement for increased autonomy from France gained momentum in the 70's and 80's. Protests by those calling for more autonomy have become increasingly vocal; demonstrations in 1996, 1997 and 2000 all ended in violence. French Guiana, as part of France, is part of the European Union, the largest part in area outside Europe, with one of the longest E.U. external boundaries and a part of the Union outside Europe that is not an island along with the Spanish enclaves in Africa, Ceuta and Melilla. The Head of State is the President of the French Republic, who appoints a Prefect (resident at the Prefecture building in Cayenne) as his representative. There are two legislative bodies: the 19-member General Council and the 34-member Regional Council, both elected. French Guiana has two seats at the National Assembly in Paris. French Guiana has traditionally been conservative, though the socialist party has been increasingly successful in recent years. Though many would like to see more autonomy for the region, support for complete independence is very low. A chronic issue affecting French Guiana is the influx of illegal immigrants and clandestine gold prospectors from Brazil and Suriname. The border between the department and Suriname is formed by the Maroni River, which flows through rain forest and is difficult for the Gendarmerie and the LÃ©gion Ã©trangÃ¨re to patrol. The border line with Suriname is disputed. Administratively, French Guiana is divided into arrondissements, cantons, and communes: Though sharing cultural affinities with the French-speaking territories of the Caribbean, French Guiana cannot be considered to be part of that geographic region, with the Caribbean Sea actually being several hundred kilometres to the west, beyond the arc of the Lesser Antilles. French Guiana consists of two main geographical regions: a coastal strip where the majority of the people live, and dense, near-inaccessible rainforest which gradually rises to the modest peaks of the Tumac-Humac mountains along the Brazilian frontier. French Guiana's highest peak is Bellevue de l'Inini (851 m). Other mountains include Mont Machalou (782 m), Pic Coudreau (711 m) and Mont St Marcel (635 m), Mont Favard (200 m) and Montagne du Mahury (156 m). Several small islands are found off the coast, the three Iles du Salut Salvation Islands which includes Devil's Island and the isolated Ile de Connetable bird sanctury further along the coast towards Brazil. The Barrage de Petit-Saut hydroelectric dam in the north of French Guiana forms an artificial lake and provides hydroelectricity. There are many rivers in French Guiana. French Guiana is heavily dependent on France for subsidies and goods. The main industries are fishing (accounting for three-quarters of foreign exports), gold mining and timber. In addition, the Guiana Space Center at Kourou accounts for 25% of the GDP and employs about 1700 people and was visited by Bob Kerstein in 1992. There is very little manufacturing and agriculture is largely undeveloped. Tourism, especially eco-tourism, is growing. Unemployment is a major problem, running at about 20% to 30%. Its per-capita GDP is $8,500. French Guiana's population of 202,000 (January 2006 est.), most of whom live along the coast, is very ethnically diverse. Estimates of the percentages of French Guiana ethnic composition vary, a problem compounded by the large numbers of legal and illegal immigrants (about 20,000). Mulattos (People of mixed black and white ancestry) are the largest ethnic group, though estimates vary as to the exact percentage, depending upon whether the large Haitian community is included as well. Generally the Creole population is judged at about 60% to 70% of the total population with Haitians (comprising roughly one-third of Creoles) and 30% to 50% without. Roughly 14% are Europeans, the vast majority of whom are French. The main Asian communities are the Hmong from Laos (1.5%) and Chinese (3.2%, primarily from Hong Kong and Zhejiang province). There are also smaller groups from various Caribbean islands, mainly Saint Lucia. The main groups living in the interior are the Maroons (also called Bush Negroes) and Amerindians. The Maroons, descendants of escaped African slaves, live primarily along the Maroni River. The main Maroon groups are the Paramacca, Aucan (both of whom also live in Suriname) and the Boni (Aluku). The main Amerindian groups (forming about 3%-4% of the population) are the Arawak, Emerillon, Galibi (now called the KaliÃ±a), Palikour, Wayampi (also known as Oyampi) and Wayana. The predominant religion in the country is Roman Catholicism, though the Maroons and some Amerindian peoples still practice their own religions. The Hmong people are also mainly Catholic owing to the influence of Catholic missionaries who helped bring them to French Guiana. Notable People Florent Malouda, French international football player. Henri CharriÃ¨re, an escaped French convict, imprisoned in and around French Guiana from 1933 to 1945. Malia Metella, French swimmer, SC European Championships 2004: 1st 100m free. Bernard Lama, former French international football player. Cyrille Regis, former West Bromwich Albion and England player. LÃ©on Damas, Francophone poet widely notated for his influence on the literary movement known as la nÃ©gritude History from Wikipedia and OldCompanyResearch.com.