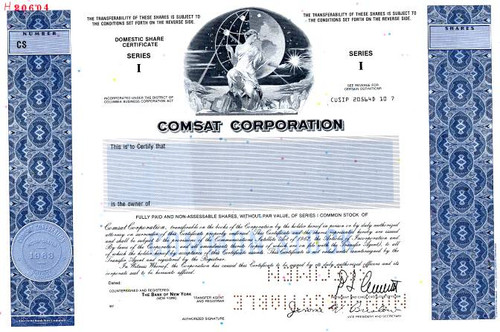 Beautifully engraved certificate from the Comsat Corporation. This historic document was printed by the American Banknote Company in 1993 and has block border with a vignette of an allegorical woman inspace. This item has the printed signatures of the Company's President and Chief Executive Officer, Bruce L. Crockett and Vice President and Secretary. 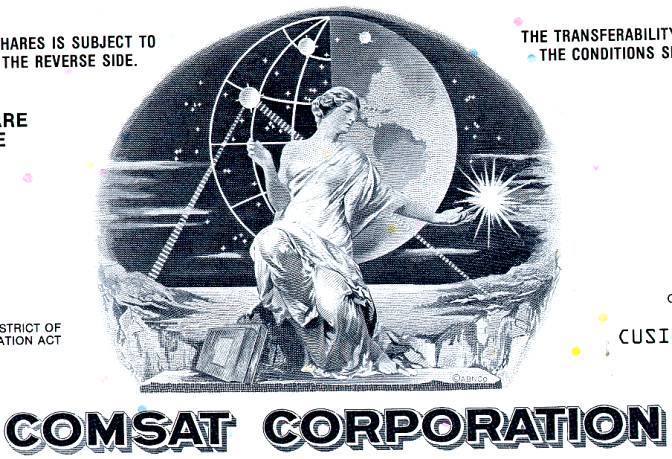 Certificate Vignette
Based in Bethesda, Maryland, COMSAT employed some 1,600 people and focused on international satellite communications services and digital networking services and technology. COMSAT is the U.S. signatory to INTELSAT, a 143-member nation organization that served more than 180 countries, and INMARSAT, which provides mobile satellite communications worldwide, and was the largest provider of space segment capacity in these organizations. COMSAT offered voice, data and video transmission services for its customers, which included telecommunications carriers, private-network providers, multinational corporations, the U.S. government and a variety of broadcasting organizations. COMSAT's digital networking services business operated in 11 countries, and provided its customers in rapidly growing international markets with start-to-finish networking solutions. On September 18, 1999, Comsat was acquired by the Lockheed Martin Corporation . Key events in Comsat history: 1961 President Kennedy calls for international satellite communications system. 1962 Congress passes Communications Satellite Act. The Communications Satellite Corp. (Comsat) is born. 1965 Comsat launches Early Bird, the first satellite designed for commercial communciations. 1975 Comsat joins IBM Corp. and Aetna Life & Casualty Co. to form Satellite Business Systems (SBS), a network for private data and television communications. 1984 Comsat drops out of money-losing SBS after an investment of $250 million. Comsat abandons plans to enter the direct broadcast satellite television market, which now has 7 million customers. 1989 Comsat acquires a majority share of the NBA's Denver Nuggets, an example of the company's move into the sports and entertainment industry. 1990 Bob Kerstein joined American Mobile Satellite as Chief Financial Officer. 1992 Comsat President Bruce L. Crockett becomes CEO and increases the company's investment in entertainment. 1996 In July, Comsat announces that its entertainment holdings lost $6.4 million for the quarter. Crockett resigns and Betty C. Alewine is his successor. On the beam: One of the satellite dishes in Montgomery County that form part of Comsat's core business. Prepared: Comsat CEO Betty Alewine reportedly positioned the company for a takeover. Satellite history: Comsat's laboratories in Clarksburg contain models of communications satellites. 1999 Comsat was acquired by Lockheed Martin Corporation. About Specimen Certificates Specimen Certificates are actual certificates that have never been issued. They were usually kept by the printers in their permanent archives as their only example of a particular certificate. Sometimes you will see a hand stamp on the certificate that says "Do not remove from file". Specimens were also used to show prospective clients different types of certificate designs that were available. Specimen certificates are usually much scarcer than issued certificates. In fact, many times they are the only way to get a certificate for a particular company because the issued certificates were redeemed and destroyed. In a few instances, Specimen certificates were made for a company but were never used because a different design was chosen by the company. These certificates are normally stamped "Specimen" or they have small holes spelling the word specimen. Most of the time they don't have a serial number, or they have a serial number of 00000. This is an exciting sector of the hobby that has grown in popularity over the past several years.