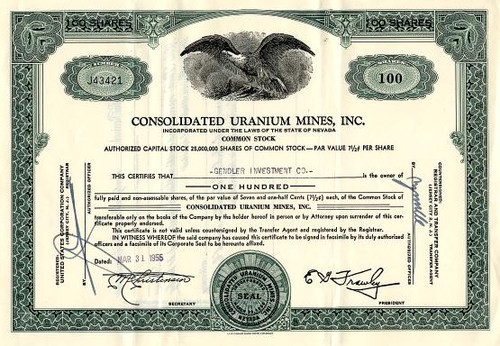 Beautiful certificate from the Consolidated Uranium Mines issued in 1955. This historic document was printed by Columbian Banknote Company and has an ornate border around it with a vignette of an eagle. This item has the signatures of the Company's President, Edward G. Frawley and Secretary and is over 52 years old. 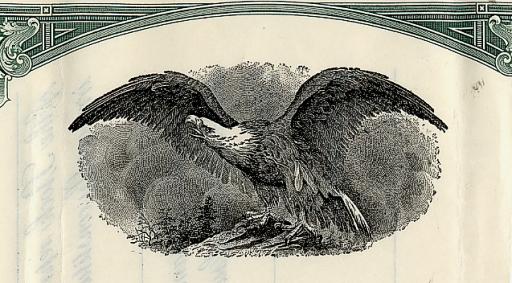 Certificate Vignette
Time Magazine - Monday, May. 07, 1956 The Sure Thing Over Manhattan television and radio stations, in full-page newspaper ads and in big-scale direct mail promotions, Jersey City Broker Walter F. Tellier plugged his penny uranium stocks as "a ground-floor opportunity," "the best buy in 20 years." "You can't lose--you're investing in a sure thing," his high-pressure salesmen promised investors. With this glib spiel, Tellier, one of the biggest over-the-counter dealers in the U.S., since 1951 lured in 50,000 buyers of shares in Utah's Consolidated Uranium Mines Inc. He said that Consolidated had 85,000 acres of uranium land leases and had discovered $1,000,000 worth of uranium ore on only three of these acres. His salesmen grandly put Consolidated's net worth at $85 million, said the company's gross would jump 10% yearly and the stock would sell at up to $20 a share in a few years. The Securities and Exchange Commission began looking into Tellier's promotion of Consolidated and other penny stocks, but its investigation did not get off the ground until January 1955--long after most of his big issues were sold out. After SEC's finding got through departmental red tape and into the Justice Department, Tellier was indicted last December for defrauding 1,400 people of $900,000 in the bankrupt Alaska Telephone Corp. Last week Tellier was indicted again for fraud: a federal grand jury in Brooklyn charged him with manipulating stock prices and with swindling Consolidated shareholders out of $15 million. In pushing sales of Consolidated, Tellier had far more in mind than brokers' commissions. He was a big investor in Consolidated himself, bought 250,000 shares at 1¢, got an option to buy 1,000,000 shares at 20¢. Then, said the grand jury, by fraudulent advertising and "over-the-counter manipulation" of the 20 million shares he handled, Tellier ran the price up as high as $1.87 a share and unloaded his own holdings. Consolidated Uranium itself had no part in the deal, and President Edward G. Frawley repeatedly protested to Tellier about the "exaggerated statements" in sales literature. Actually, Consolidated does not even own its biggest ore fields, and may lose them when its contracts expire in 1960. At most, its net worth is $1,000,000. Current value of the stock: about 20¢.