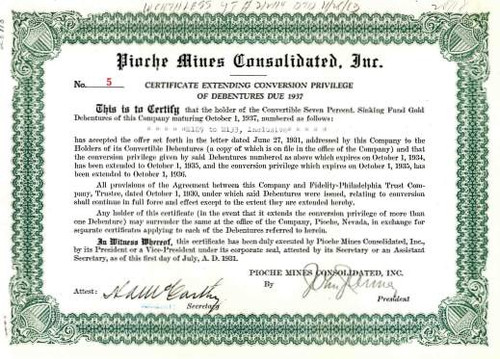 Beautifully engraved certificate from the Pioche Mines Consolidated, Inc. issued in 1931. This historic document has an ornate border around it. This item is hand signed by the Company's President, ( John Janney ) and Assistant Secretary and is over 71 years old. Pioche Nevada, Lincoln County Silver was discovered in 1864 but no developments took place until 1869 when the mines opened up and the town of Pioche was developed. Soon came the wild rush of prospectors and fortune seekers and the town then gained the reputation in 1870's for the tough gunmen and bitter lawsuits. They remove some five million dollars in ore by 1872, and by 1900 Pioche was nearly a ghost town. Designed as the county seat in 1871, Pioche survived hard times as a supply and government center for avast area. In later years, notably during World War II profitable lead-zinc deposits were developed. Pioche Mines Consolidated, Inc. had 7 different mines developed over a 5 miles property. The Company also built an aerial tramway that operated in the 1920's and 1930's that carried ore from the mines on Treasure Hill to Godbe's Mill. The tramway was mainly gravity and was powered with the aid of a five horsepower motor. The ore in the full buckets rolled toward the mill providing the momentum to return the empty buckets to the bin. In 1928 the cost of delivering ore to the mill via this tramway was six cents per ton.