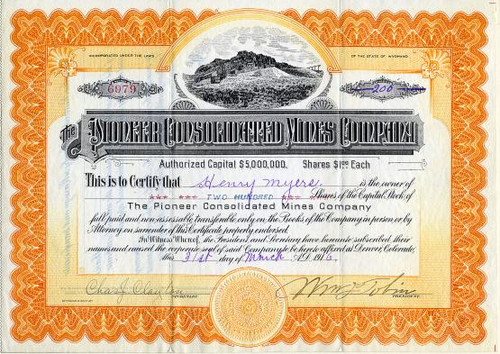 Beautifully engraved certificate from the Pioneer Consolidated Mines Company issued in 1916. This historic document was printed by Smith-Brooks Company and has an ornate border around it with a vignette of a mine and millsite in the mountains. This item has the signatures of the Company's President and Secretary and is over 90 years old.

Certificate Vignette
Incorporated Under the Laws of the State of Wyoming with the mines located in Nye County, Bullfrog, Nevada. The Pioneer Mine was located several miles north of Rhyolite. A townsite of the same name started around 1909. The mine produced millions in gold from two different types of ore deposits and veins. Consisted of 12 claims on 180 acres There were several different camps and a number of different mines operating in the area at the time the Pioneer mine was discovered. It was the discovery of the Pioneer mine that changed the district forever. A new camp began to form in 1908 between the Pioneer mine and the Mayflower mines already in existence. It grew at an amazing rate and had a population of 1,000 by 1909. A post office opened in March and Pioneer was officially a town. Pioneer had two sections called upper and lower towns. Businesses included a lumber company, a theater, hotels, saloons, restaurants, bakeries, a shoe store, boardinghouses, a cigar store, a Western Union office, and more. The Pioneer Consolidated Mines Company purchased the Pioneer mine and eleven other claims in 1909. But the Pioneer mine was the gem. A fire that swept through the tinder-dry wood buildings in 1909 was devastating for the booming town. Although the town was partially rebuilt, the fire took the life out of Pioneer, and it never fully recovered. The mine partially collapsed in 1914 and was forced to shut down along with the mills. The reopening of the mine in 1915 gave sagging Pioneer a small lift but not enough to restore the town to its former self. But activity continued until 1931 when it was no longer profitable to maintain operations. The mine closed and the town died. The ruins of Pioneer are scant. But during its lifetime, the district produced $1.6 million worth of ore. History from Wikipedia.