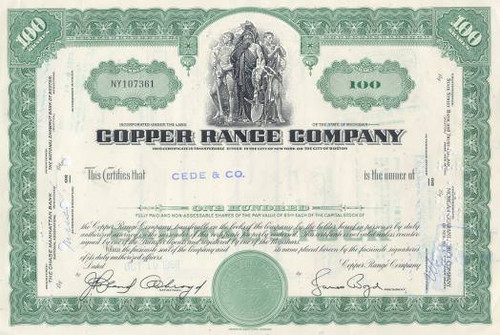 Beautifully engraved Certificate from the famous Copper Range Company issued in the 1960's. This historic document was printed by the American Banknote Company and has an ornate border around it with a vignette of 3 allegorical figures. This item is has the printed signature of the company's president and is over 31 years old. History of Copper Range Company The White Pine orebody lies in the southern limb of the Lake Superior syncline. It is the largest known copper-shale orebody in the United States. The three main rock formations of the White Pine region are the Freda Sandstone, Nonesuch Shale and Copper Harbor Conglomerate. Together, they have a total thickness of approximately 12,000 ft. The main copper mineralization is found at the base of the Nonesuch Shale. The lower most sedimentary formation, the Copper Harbor Conglomerate, overlies the volcanic Portage Lake Lava series. It is 350 feet thick in areas south of White Pine but increases to more than 6,000 feet thick near the shore of Lake Superior. This formation is composed of cross bedded, reddish-brown to grayish-brown, fine to coarse-grained sandstone, felsic conglomerate and reddish-brown siltstone. Directly overlaying the Copper Harbor Conglomerate is the Nonesuch Shale. This is a shale group totaling 600 feet in thickness and made up of rippled-laminated gray to brownish gray siltstone containing minor shale and sandstone that have reddish-gray partings. The lower 100 feet are gray to dark gray siltstone. Massive light-gray siltstone to very fine grained sandstone is abundant in the lower middle and uppermost sections. Topmost is the Freda Sandstone. Locally it is a light gray sandstone up to 6,000 feet in thickness. The glacial overburden consists of gravel, sand and clay reaching thicknesses of 30 to 150 feet with the majority of the area in the range of 50 to 60 feet. Copper mineralization is confined to the lower 3 to 22 feet of the shales in the Nonesuch formation and the upper 10 feet of the Copper Harbor Conglomerate where it has been found sporadically. Mine terminology for the host formations are the Lower Sandstone (Copper Harbor Conglomerate), Parting Shales, Upper Sandstone and Upper Shales. Within these four groups some 13 individual beds are recognized. The predominate structural features within the White Pine region are the northwest-southeast trending White Pine Anticline, the northwest-southeast trending White Pine Fault and the northeast-southwest trending Iron River Syncline. Underground Mine Workings Copper ore has been mined at the White Pine Mine since the turn of the century. The greatest ore removal occurred from 1952 until 1995 and peaked in 1973 when the mine employed over 3000 people. Ore was removed from the orebody using the "room and pillar" technique, wherein voids ("rooms") were created by excavating the ore and "pillars" of rock were left behind for roof support. The underground mine consists of about 13 square miles of now-abandoned workings, with an approximate void volume of over 16 billion gallons, extending beneath a surface area of approximately 25 square miles. The maximum depth of the mine workings is 2840 ft. Alternative operations to conventional ore removal have been considered at the White Pine Mine. Most notably between 1994 and 1996, CRC examined the technical, economic, and environmental feasibility of solution mining the remaining ore reserves, but later on decided to fully close the mine without further pursuing the solution mining project. Mine History The underground mine was operated from the late 1800s through September 1995. Initial mining focused on native copper within the Nonesuch Formation. Between 1937 and 1950, activities at the Mine focused primarily upon research and development of the ore body. In early 1952, when advances in mining processes verified that the copper mineral "chalcocite" could be successfully smelted, construction of the existing Mine facility began and the first ore was mined a year later. Physical development and start of operations of the mill and smelting facilities occurred in 1954. The first copper from the new Mine facility was produced in January 1955. In 1977, CRC was purchased by the Louisiana Land and Exploration Company. The refinery and continuous casting operations were added to the Mine complex in 1981. Most of the operations were suspended in 1982 followed by a temporary shutdown in 1984 for approximately 12 months. Echo Bay Mines Limited purchased CRC in January 1985. In November of 1985, CRC employees, through an Employee Stock Ownership Plan ("ESOP"), bought and operated CRC until May 1989. At that time, the majority of CRC stock was purchased by a wholly owned subsidiary of Inmet Mining Corporation (formerly Metall Mining Corporation). In February 1995, the smelting operations were suspended. In September 1995, both the conventional underground mining and milling operations were suspended, and in October 1996, underground mine dewatering was also discontinued. MDEQ approved pilot- and commercial scale solution mining in May 1996 by the issuance of a State Permit to discharge to the unusable deep aquifer. In October 1996, CRC suspended a pilot-scale solution mining program and in May 1997, CRC withdrew the Underground Injection Control (UIC) permit application which had been pending before EPA. CRC's present activities solely focus on the disposal of existing assets and the full closure of all facilities.

US Department of Commerce (Certificate of Service for Seaman) - 1940 WWII