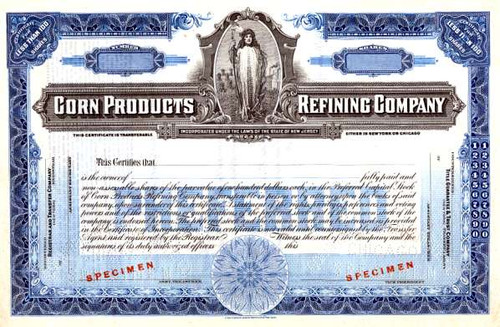 Beautifully engraved RARE SPECIMEN certificate from the Corn Products Refining Company printed around 1910. This historic document was printed by the Columbian Banknote Company / Chicago and has an ornate border around it with a vignette of a woman inside of a corn cob. 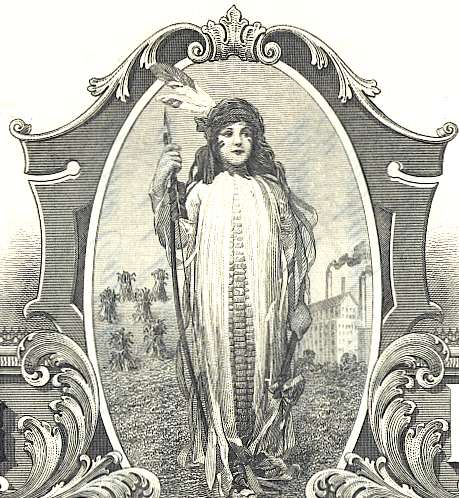 Certificate Vignette
The history of Corn Products International, Inc. began in 1906 when the leading corn refiners in the United States merged to form Corn Products Refining Company. Since then, Corn Products International has grown into one of the world's largest corn-refining operations. During the early 1900s, Corn Products began international expansion with ventures into Europe. These associated facilities had spread out across numerous countries in Europe for many years. In 1987, during a restructuring period, all remaining European operations were sold. In 1919, Corn Products purchased a corn-refining business in Canada. Corn Products set up its first Latin American business in 1928 with operations in Argentina. Currently, that business is the only monohydrate dextrose producer in South America. Brazil, now the largest corn wet miller on that continent, came on board a year later--in 1929. Soon afterward, in 1930, Corn Products expanded into Mexico, and into Asia with ventures in Korea and Japan. In 1933, a corn-refining operation was established in Colombia, which has since become the country's number-one corn wet miller based on grind capacity. By 1958, Corn Products Refining Company became Corn Products Company. That same year, growth in South America continued with the founding of operations in Uruguay. Corn Products started operations in Chile in 1961. And, in 1962, the largest corn-refining plant in Pakistan became part of Corn Products. In 1967, the Company established a presence in Malaysia, the country's sole supplier of monohydrate dextrose and glucose syrup solids. The business enhanced the Company's geographic reach in Asia. In 1969, Corn Products Company changed its name to CPC International Inc. Corn Products ventured into a new market in 1973 with the addition of Kenya as the only corn-wet miller in East and Central Africa. Between 1974 and 1995, the Company entered into a number of agreements that extended its reach into Ecuador and South Africa. In 1997, Corn Products established operations in Thailand, and increased its business in Brazil. Late that year, Corn Products International, Inc. became an independent public company. About Specimen Certificates Specimen Certificates are actual certificates that have never been issued. They were usually kept by the printers in their permanent archives as their only example of a particular certificate. Sometimes you will see a hand stamp on the certificate that says "Do not remove from file". Specimens were also used to show prospective clients different types of certificate designs that were available. Specimen certificates are usually much scarcer than issued certificates. In fact, many times they are the only way to get a certificate for a particular company because the issued certificates were redeemed and destroyed. In a few instances, Specimen certificates we made for a company but were never used because a different design was chosen by the company. These certificates are normally stamped "Specimen" or they have small holes spelling the word specimen. Most of the time they don't have a serial number, or they have a serial number of 00000. This is an exciting sector of the hobby that grown in popularity and realized nice appreciation in value over the past several years. History from company press releases.