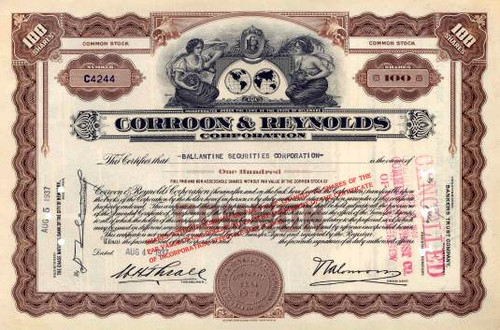 Beautifully engraved certificate from the Corroon & Reynolds Corporation issued in 1937. This historic document was printed by the Hamilton Banknote Company and has an ornate border around it with a vignette of the company logo between allegorical women. This item has the printed signatures of the Company's President and Treasurer and is over 69 years old.

Certificate Vignette
Willis has an illustrious history. Its origins lie in the early 19th century with the founding in London of three firms, Henry Willis & Co, Faber Brothers, and Dumas & Wylie, the first two of which merged in 1897 to form Willis, Faber & Co. When that firm was joined by Dumas & Wylie, in 1928, the famous name of Willis, Faber & Dumas Limited came into being. R A Corroon & Co. Inc., was established in New York in 1905. In 1966 it merged with C R Black Jr Corporation. Of a great many subsequent amalgamations the most significant was with Synercon Corporation, of Nashville, in 1976. In mid-1998 the Group's shareholders accepted an offer from the leveraged buy-out specialists Kohlberg Kravis Roberts. Consequently the Group, which had been publicly quoted since 1976, reverted to being a private company. In 1999, the Group's operations amalgamated under one name Willis Group Limited. 1828 Henry Willis & Co. established 1843 Dumas & Wylie established 1886 Faber Brothers established 1898 Willis, Faber & Co. formed by merger 1905 R.A. Corroon & Co. established 1928 Willis Faber & Dumas formed by merger 1968 Corroon & Reynolds Corporation name was changes to Corroon & Black Corp. 1976 Willis Faber listed on stock exchange 1990 Willis Corroon Group formed by merger 1998 Willis Corroon Group acquired by Trinity Acquisition 1999 The Group's operations are amalgamated under one name: Willis Group 2001 Willis Group Limited listed on the New York Stock Exchange