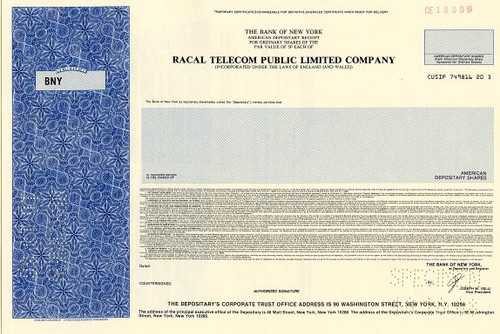 Beautiful engraved Specimen ADR certificate from the Racal Telecom Public Limited Company . This historic document was printed by United States Banknote Corporation and has an ornate border around it. This item has the printed signature of the Company's Vice-President. Vodafone Group Public Limited Company operates as a mobile telecommunications company primarily in Europe, the Middle East, Africa, Asia Pacific, and the United States. Its products and services include voice services; short messaging service; Vodafone live! portal, an integrated communications and multimedia proposition, through which customers access various online services, such as games, ringtones, news, sports, and information; Mobile Connect data card, which provides access to existing business information systems, such as email, corporate applications, company intranets, and the Internet; and wireless, roaming, and other business services. The company distributes its products and services directly, as well as through third-party service providers, independent dealers, and agencies. As of March 31, 2006, the company served approximately 170.6 million customers worldwide. It has a strategic partnership with Telecom Egypt; and a strategic alliance with Yahoo!, Inc. to create mobile advertising business. Vodafone Group was founded in 1984. It was formerly known as Racal Strategic Radio Limited and changed its name to Racal Telecommunications Group Limited in 1985. Further, the company changed its name to Racal Telecom Limited in 1988; to Vodafone Group Public Limited Company in 1991; to Vodafone AirTouch Plc in 1999; and subsequently to Vodafone Group Public Limited Company in 2000. Vodafone Group is headquartered in Newbury, the United Kingdom. About Specimens Specimen Certificates are actual certificates that have never been issued. They were usually kept by the printers in their permanent archives as their only example of a particular certificate. Sometimes you will see a hand stamp on the certificate that says "Do not remove from file". Specimens were also used to show prospective clients different types of certificate designs that were available. Specimen certificates are usually much scarcer than issued certificates. In fact, many times they are the only way to get a certificate for a particular company because the issued certificates were redeemed and destroyed. In a few instances, Specimen certificates we made for a company but were never used because a different design was chosen by the company. These certificates are normally stamped "Specimen" or they have small holes spelling the word specimen. Most of the time they don't have a serial number, or they have a serial number of 00000. This is an exciting sector of the hobby that grown in popularity over the past several years.