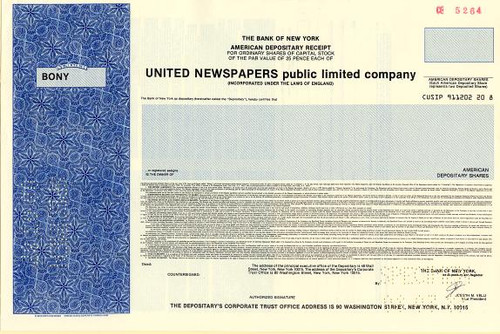 Beautiful engraved Specimen ADR certificate from the United Newspapers public limited company . This historic document was printed by United States Banknote Company and has an ornate border around it. This item has the printed signature of the Company's Vice-President. United Business Media plc Type Public (LSE: UBM.L) Founded 1918 Headquarters London, UK Key people David Levin, CEO Nigel Wilson, CFO Industry Media Products Magazines Exhibitions News Distribution Revenue £809.6 million GBP (2004) Employees 6,501 (2004) Slogan We Explore, We Exceed, You Excel United Business Media provides business information services principally to the technology, healthcare, media, automotive and financial services industries. Subsidiaries: CMP Technology CMP Asia CMP Information CMPMedica Commonwealth Business Media PR Newswire Also a major shareholder of ITN and Press Association. Headquartered at Ludgate House in London and listed on the London Stock Exchange in the FTSE 250 Index with operations in Europe, Asia and North and South America. Primary competitors are International Data Group, Reed Elsevier and VNU. Originally incorporated in 1918 as United Newspapers Limited and changed to United News & Media plc in 1995, the name it kept until 2000 when United Business Media plc was formally adopted. History from Wikipedia and OldCompanyResearch.com. About Specimens Specimen Certificates are actual certificates that have never been issued. They were usually kept by the printers in their permanent archives as their only example of a particular certificate. Sometimes you will see a hand stamp on the certificate that says "Do not remove from file". Specimens were also used to show prospective clients different types of certificate designs that were available. Specimen certificates are usually much scarcer than issued certificates. In fact, many times they are the only way to get a certificate for a particular company because the issued certificates were redeemed and destroyed. In a few instances, Specimen certificates we made for a company but were never used because a different design was chosen by the company. These certificates are normally stamped "Specimen" or they have small holes spelling the word specimen. Most of the time they don't have a serial number, or they have a serial number of 00000. This is an exciting sector of the hobby that grown in popularity over the past several years.