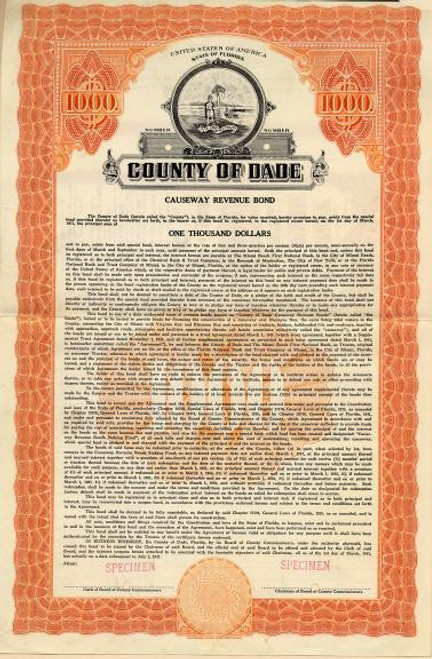 Beautifully engraved Specimen $1000 Causeway Revenue Bond from the County of Dade Causeway Revenue Bond dated 1947. This historic document was printed by Hamilton Bank Note Company and has an ornate border around it with a vignette of the Florida State Seal. This item has 47 coupons attached and is over 59 years old. 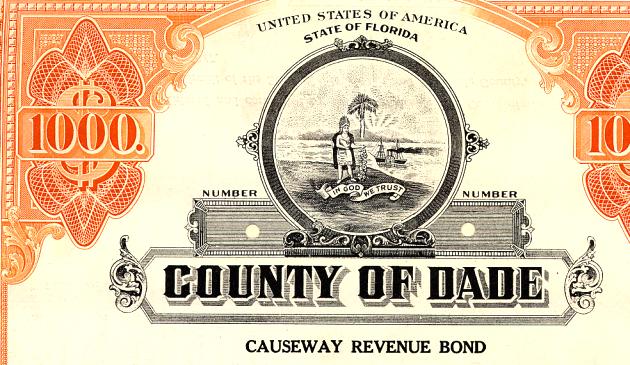 Certificate Vignette
William Roberts, in his First Discovery and Natural History of Florida (1763) wrote: "To the north hereof (Cayo de Biscayno) lies the small island of Cayo Ratones, about four miles in length, on which there is an Indian town, called Pueblo Ratones, which is the only settlement of Indians that we have any account of on the Martyres." In the summer of 1945, a group of black men led by Judge Lawson E. Thomas staged a protest at a North Miami whites-only beach against the segregation laws that prohibited black persons from using the public beaches of Miami and Dade County. In response to the protest, county officials created Virginia Key Beach Park, a public beach for the black community , which opened on August 1, 1945. The beach at Virginia Key had been used by African Americans for at least the two previous decades. During World War II, the U.S. Navy used Virginia Key Beach for training African American servicemen who were not permitted to train in the waters along the "whites-only" beaches. It was not until 1945, however, that the county began building recreational facilities there and making the beach more accessible by providing ferry boat service until the completion of the Rickenbacker Causeway in 1949 allowed access by automobile. Virginia Key Beach Park had bathhouses, picnic pavilions, a concession stand, and a carousel and other amenities. The beach remained segregated through the 1950's, until civil rights laws opened all the public beaches in the area. Still, through the next two decades, Virginia Key Beach remained a popular destination for many in the black community. In 1982, the area was transferred from the county to the City of Miami with the stipulation that the area be kept open and maintained as a public park and recreation area. However, the city closed Virginia Key Beach Park shortly after the transfer, citing the high cost of maintenance and operations. After nearly 20 years of non-use, the bathhouse, concessions building and other facilities have fallen into disrepair. In August 2002, the site was placed on the National Register of Historic Places and given a Florida Historical Marker. Miami Marine Stadium located in the center of the strip of land northeast of the Rickenbacker Causeway, was built in 1963 by the city. It was used to watch boat races, concerts and fireworks displays before closing in 1992 after being damaged by Hurricane Andrew. The structure is now abandoned and graffiti-covered. About Specimen Certificates Specimen Certificates are actual certificates that have never been issued. They were usually kept by the printers in their permanent archives as their only example of a particular certificate. Sometimes you will see a hand stamp on the certificate that says "Do not remove from file". Specimens were also used to show prospective clients different types of certificate designs that were available. Specimen certificates are usually much scarcer than issued certificates. In fact, many times they are the only way to get a certificate for a particular company because the issued certificates were redeemed and destroyed. In a few instances, Specimen certificates were made for a company but were never used because a different design was chosen by the company. These certificates are normally stamped "Specimen" or they have small holes spelling the word specimen. Most of the time they don't have a serial number, or they have a serial number of 00000. This is an exciting sector of the hobby that has grown in popularity over the past several years.