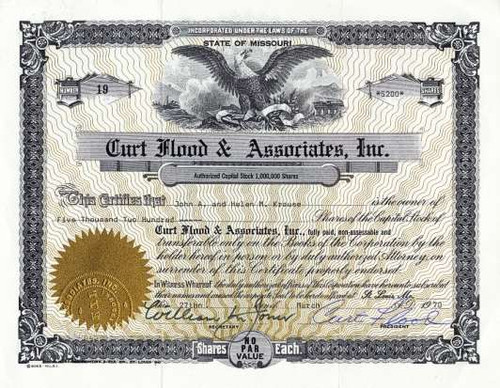 Beautifully engraved certificate from the Curt Flood & Associates issued in 1970. This historic document has an ornate border around it with a vignette an eagle. This item has the hand signatures of the Company's President, Curt Flood and its Secretary, WilliaM M. Jones. 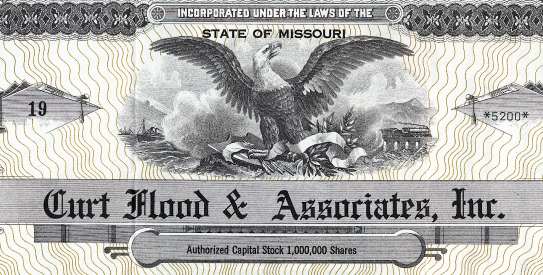 Certificate Vignette
Curt Flood, an outstanding defensive player who played 226 consecutive errorless games and recieved seven consecutive Gold Gloves, ended his baseball career after the 1969 season at age 32. He had 1,852 hits, and would have reached 3000 with seven more seasons of his average production, and he had a career BA of .293. He could have had a Hall of Fame career. But after the 1969 season concluded, Flood was told that he was being traded to the Philadelphia Phillies. Along with being one of the worst teams in baseball at the time, the atmosphere of the Phillies was very inhospitable towards African-American baseball players. Flood played in a total of 8 games with the NL's Cincinnati Reds in 1956 and 1957 and then was traded to the St. Louis Cardinals, where he became a starter in 1958. He was with the Cardinals through 1969. When he was traded to the Philadelphia Phillies in 1970, Flood refused to report and filed suit, with the backing of the Major League Players' Association. The suit charged major league baseball with violating antitrust laws and suggested that the perpetual reserve clause forced players into "involuntary servitude," a violation of the thirteenth amendment to the Constitution, which forbade slavery. A federal court judge ruled against Flood on August 12, 1970. Flood and his lawyers appeal the case to the U.S. Supreme Court while Flood decides to sit out the 1970 season. Meanwhile, the Washington Senators make a deal with the Phillies for Flood's "reserve." After determining that accepting the assignment won't hurt his case, Flood agrees to play for the Senators in 1971. After just 13 games, Flood feels he is the target of ill will in baseball and leaves the Senators to go to Denmark. He will continue his antitrust suit which will eventually reach the Supreme Court. On June 18, 1972, the U.S. Supreme Court upholds the lower court's rulings on Flood's case. Baseball will continue to be exempt from antitrust laws and its reserve clause is upheld. The decision, however, is very narrow and left the door open for legislation or collective bargaining to undermine the reserve clause. By the end of the year, the Major League owners brought an end to the reserve clause by agreeing to salary arbitration. No active baseball player testified on Curt Flood's behalf. He was forced to stand alone for the right to be treated as a human being, and was vilified for it. The public was shocked and disgusted that Flood challenged the traditions of the institution of baseball. "I was telling my story to deaf ears," he said once, "because I was telling my story to a person who would give his first-born child to be doing what I was doing, and he just could not understand how anything could possibly be wrong with baseball." Curt Flood retired from baseball and from what would probably have been a Hall of Fame career, rather than be treated as a piece of property. In 1975, an arbitor finally ruled that the reserve clause was illegal, and the owners and the Players Association worked out the system of free agency. Curt Flood was the first black to play everyday for the Cardinals and became widely regarded as the best defensive center fielder in the game. In an era of Willie Mays and Roberto Clemente, Flood earned a remarkable seven Gold Gloves and once held the major-league record for consecutive games without an error. When asked in 1990 how he would like to be remembered, Flood responded: "Just a ballplayer who tried to do what was right." Curt Flood died in January 1997 of throat cancer. Although Flood's suit was unsuccessful, the publicity surrounding led to a threat of legislative action that helped force team owners to accept outside arbitration of grievances. That ultimately led to the decision by arbitrator Peter Seitz in 1975 that the reserve clause is not binding. In Flood's 15 major league seasons, he batted .293 with 1,861 hits, including 271 doubles, 44 triples, and 85 home runs. He scored 851 runs and had 636 RBI. Below is some of the text of the Law Limiting MLB's Antitrust Exemption in Labor Matters known as the "Curt Flood Act of 1998". It is the purpose of this legislation to state that major league baseball players are covered under the antitrust laws (i.e., that major league baseball players will have the same rights under the antitrust laws as do other professional athletes, e.g., football and basketball players), along with a provision that makes it clear that the passage of this Act does not change the application of the antitrust laws in any other context or with respect to any other person or entity.