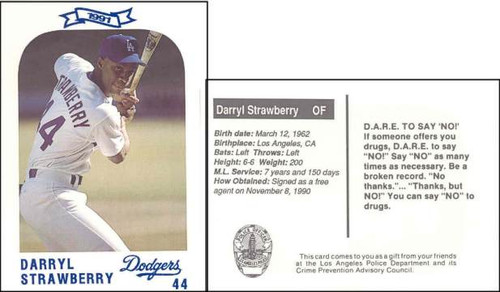 Incredible baseball card issued by the Los Angeles Police Department in 1991 when Darryl Strawberry of the New York Yankees was on the Los Angeles Dodgers. The card was issed on behalf of the Crime Prevention Advisory Council in the D.A.R.E. to say no to drugs program. Unfortunately, 10 years after this card was issued Darryl was in Hillsborough County Court in Tampa, Florida, May 17, 2001, as Judge Florence Foster sentenced him to a drug rehabilitation facility for a violation of his probation on drug charges. The judge suspended a sentence of 18 months in the Florida State Prison. He was adjudicated guilty of cocaine possession and attempting to solicit a prostitute.