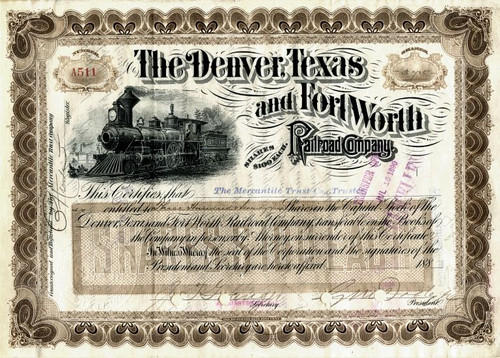 Beautiful certificate from the Denver, Texas, and Fort Worth Railroad Company issued in 1880's. This historic document was printed by Homer Lee Bank Note and has an ornate border around it with a vignette of a steam engine train. This item has the signatures of the Company's President, Grenville M. Dodge and Secretary and is over 133 years old.  Punch cancelled.

Grenville Mullen Dodge (April 12, 1831 January 3, 1916) was a Union army officer on the frontier and during the Civil War, a U.S. Congressman, businessman, and railroad executive who helped construct the Transcontinental Railroad. He was one of the founders of the General Mills Corporation. Early life and career Dodge was born in Putnamville, near Danville, Massachusetts. He graduated from Norwich University with a degree in civil engineering. For the next decade, he was involved in surveying for railroads, including the Union Pacific. He was also a partner in the Baldwin & Dodge Banking Firm. Civil War Dodge joined the Union Army in the Civil War. At the beginning of the war, Dodge was sent by the Governor of Iowa to Washington, D.C., where he secured 6,000 muskets to supply Iowa volunteers. In July of 1861, he was appointed Colonel of the 4th Iowa Volunteer Regiment. He commanded the 1st Brigade, 4th Division at the Battle of Pea Ridge, where he was wounded. For his services at the battle, he was appointed brigadier general of volunteers and placed in command of the District of the Mississippi, where he was involved in protecting and building railroads. He was appointed major general in June of 1864 and commanded the XVI Corps during William T. Sherman's Atlanta campaign. At the Battle of Atlanta, the XVI Corps was held in reserve, but it happened to be placed in a position which directly intercepted John B. Hood's flank attack. During the fighting Dodge rode to the front and personally led Thomas W. Sweeny's division into battle. This action outraged Sweeny so much that he got in a fistfight with Dodge. Sweeny received a court-martial for this action while Dodge continued to lead the corps at the Battle of Ezra Church. During the ensuing siege of Atlanta, while looking through an eyehole in the Union breastworkds a Confederate sharpshooter spotted him and shot him in the head. He recovered but was unable to return to field command and he was placed in command of the Department of the Missouri. During the war, he provided information to Thomas Clark Durant, who smuggled contraband cotton from the Confederate States and who consequently made a fortune. He was wounded in the Atlanta campaign. After recovering, he was to complete the war as commander of the Department of the Missouri. Indian campaigns As the Civil War was coming to a close, Dodge's Department of the Missouri was expanded to include the departments of Kansas, Nebraska and Utah. During the summer of 1865, Sioux, Cheyenne and Arapaho Indians had been raiding the Bozeman Trail and overland mail routes. Dodge ordered a punitive campaign to quell these raids, which came to be known as the Powder River Expedition. Field command of the expedition was given to Brig. Gen. Patrick Edward Connor, who commanded the District of Utah. Connor's men inflicted a decisive defeat on the Arapaho Indians at the Battle of the Tongue River, but the expedition in general was inconclusive and eventually escalated into Red Cloud's War. Railroads During the 1865 campaign in the Black Hills, while escaping from a war-party, Dodge realized he had found a pass for the Union Pacific Railroad. In May 1866, he resigned from the military and, with the endorsement of Generals Grant and Sherman, became the Union Pacific's chief engineer and thus a leading figure in the construction of the Transcontinental Railroad. Dodge's job was to plan the route and devise solutions to any obstacles encountered. Dodge had been hired by Thomas Clark Durant who was the major investor in the Union Pacific. Durant was also defrauding the company and manipulated the route to suit his land-holdings. This brought him into vicious conflict with Dodge. Eventually Durant imposed a consulting engineer named Silas Seymour to spy and interfere with Dodge's decisions. Seeing that Durant was making a fortune, Dodge bought shares in Durant's company, CrÃ©dit Mobilier, which was the main contractor on the project. He made a substantial profit, but when the scandal of Durant's dealings emerged, Dodge removed himself to Texas to avoid testifying in the inquiry. Politics and later life In 1866, Dodge obtained the Iowa congressional nomination and won. This brought problems since he was also away much of the time building the railroad. His time in Washington was often spent lobbying on behalf of the Union Pacific, although he supported internal improvements to the West. He was a delegate to the Republican National Convention in Chicago in 1868 and again at the 1876 convention in Cincinnati. After his term in office expired, he returned to railroad engineering. During the 1880s and 1890s, he served as president or chief engineer of dozens of railroad companies. Dodge went to New York City to manage his growing number of businesses he had developed. Dodge returned to his home state of Iowa and died in Council Bluffs. He is buried there in Walnut Hills Cemetery. The famed Western frontier town Dodge City, Kansas, was named in his honor. Although Dodge Street in Omaha, Nebraska, the former location of Union Pacific Headquarters, is often reputed to have been named after him the street was actually named for influential (and unrelated) Iowa Senator Augustus Dodge. History from Wikipeida and OldCompanyResearch.com.