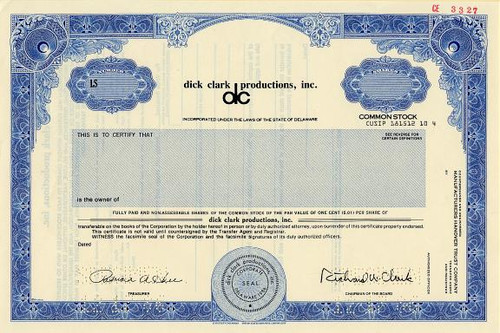 Certificate Vignette
Dick Clark Productions is an entertainment production company founded by entertainer Dick Clark. Since its inception in 1957, the company has produced a number of television shows, television specials and televised movies. Such programs include American Bandstand, Where The Action Is, TV Bloopers & Practical Jokes, Camp Midnite, and the NBC series American Dreams (which includes classic footage from American Bandstand). Its work also includes such specials as the Academy of Country Music Awards its first awards show, American Music Awards, the Golden Globe Awards and Dick Clark's New Year's Rockin Eve. The company licenses its name to a group of restaurants, including Dick Clark's American Bandstand restaurant in the Kansas City, Missouri suburb of Overland Park, Kansas, and four similarly named restaurants in airport terminals in Indianapolis, Indiana, Newark, New Jersey, Phoenix, Arizona, and Salt Lake City, Utah. The company's headquarters is located in Burbank, California. History from Wikipedia and OldCompanyResearch.com. About Specimens Specimen Certificates are actual certificates that have never been issued. They were usually kept by the printers in their permanent archives as their only example of a particular certificate. Sometimes you will see a hand stamp on the certificate that says "Do not remove from file". Specimens were also used to show prospective clients different types of certificate designs that were available. Specimen certificates are usually much scarcer than issued certificates. In fact, many times they are the only way to get a certificate for a particular company because the issued certificates were redeemed and destroyed. In a few instances, Specimen certificates we made for a company but were never used because a different design was chosen by the company. These certificates are normally stamped "Specimen" or they have small holes spelling the word specimen. Most of the time they don't have a serial number, or they have a serial number of 00000. This is an exciting sector of the hobby that grown in popularity over the past several years.