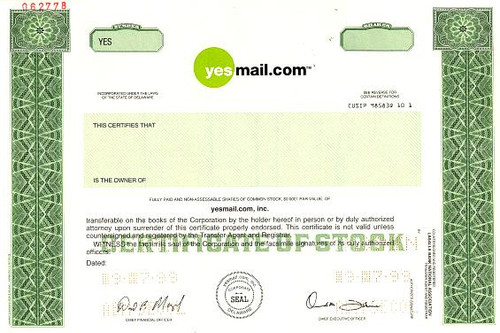 Beautiful engraved RARE specimen certificate from the yesmail.com dated in 1999. This historic document was printed by United States Bank Note Company and has an ornate border around it with a vignette of the company logo. This item has the printed signatures of the Company's President, David M. Tolmie and Secretary, David B. Menzel.

Certificate Vignette
Yesmail.com, Inc. provides direct marketing services to about 90 corporate clients, including AT&T and eToys. It sends out e-mail tailored to the specific interests of more than four million subscribers who use the company's My.YesMail system and have agreed to receive promotional materials. Yesmail.com pitches its "permission" e-mail as a more targeted alternative to online banner ads and traditional direct mail. Consumers elect to receive mail in more than 20 categories, including business, shopping and computers. On Dec 27, 1999, CMGI, Inc. agreed to acquire the e-mail marketing software producer, Yesmail.com, Inc., for $523 million. According to the terms of the agreement, CMGI will exchange 0. 1252 shares for each of Yesmail.com's outstanding shares. This deal valued Yesmail at $563 million, or $27.74 per share. After the news was announced, shares of Yesmail.com soared $3 to $24, while shares of CMGI declined $6, to close at $199.75. About Specimens Specimen Certificates are actual certificates that have never been issued. They were usually kept by the printers in their permanent archives as their only example of a particular certificate. Sometimes you will see a hand stamp on the certificate that says "Do not remove from file". Specimens were also used to show prospective clients different types of certificate designs that were available. Specimen certificates are usually much scarcer than issued certificates. In fact, many times they are the only way to get a certificate for a particular company because the issued certificates were redeemed and destroyed. In a few instances, Specimen certificates we made for a company but were never used because a different design was chosen by the company. These certificates are normally stamped "Specimen" or they have small holes spelling the word specimen. Most of the time they don't have a serial number, or they have a serial number of 00000. This is an exciting sector of the hobby that grown in popularity over the past several years.