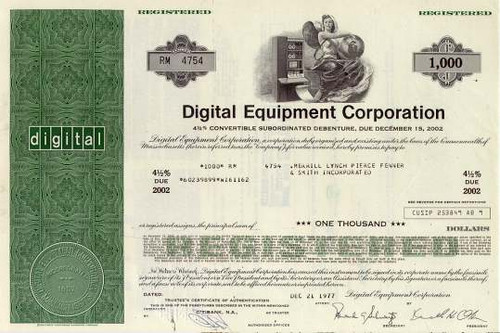 Beautifully engraved and hard to find cancelled certificate from the Digital Equipment Corporation issued in the 1970's. This is a 4 1/2% Convertible Subordinated Debenture that was due in 2002. This historic document was printed by the Security-Columbian Banknote Company and has an ornate border around it with a vignette of an allegorical woman holding a globe in front of an old PDP-12 DEC computer. This item has the printed signatures of the company's president (Kenneth Olsen) and its secretary. This early computer certificate is over 28 years old. 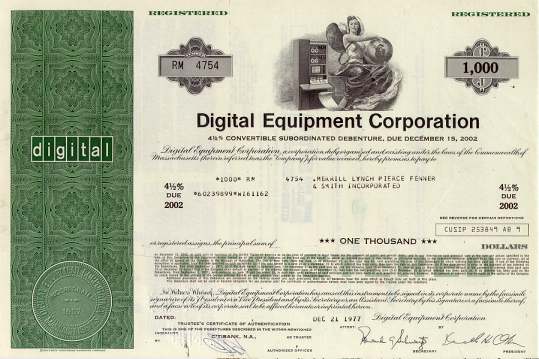 Certificate Vignette
Prior to its acquisition by #1 PC maker Compaq in 1998, the company was a top supplier of networked computer systems and components, software, and services. Digital developed the speedy 64-bit Alpha microprocessor; Alpha-based products included workstations and servers. Digital also sold UNIX-based computers, network components (such as adapters and hubs), PCs, and peripherals. Digital (formerly known as DEC) also offered services such as network design and support, systems integration, and project management. Formerly based in Maynard, Massachusetts, the company's last reported sales were more than $13 billion in fiscal 1997. MIT engineers Kenneth Olsen and Harlan Anderson founded Digital in 1957. The company produced the PDP-1, the first interactive computer, in 1960, and the PDP-5, dubbed the minicomputer, in 1963. Number-crunching breakthroughs soon followed. Digital's revenues and profit growth averaged 30% per year for almost two decades. Digital began its networking tradition in 1974, introducing digital network architecture (DNA) to link its computers to LANs and WANs; the result was DECnet Phase I. Digital engineering whiz Gordon Bell conceived of the VAX line of computers, which allowed easy upgrades from PDPs and virtually unlimited memory; the VAX-11/780 appeared in 1977. In 1979 Olsen pledged billions to an expanded VAX generation using all Digital-made components. The company focused the new VAXs (including the VAX 6000 mini, 1984) on the larger commercial market and extended its DECnet umbrella to provide global company/client/supplier connections. During the VAX glory days, between 1984 and 1988, sales doubled and earnings nearly quadrupled. However, the 1990s were an entirely new decade for the company. Digital was slow to comprehend the growing importance of UNIX. "UNIX is snake oil," declared CEO Olsen, one of the many factors that led to his departure. (He was replaced in 1992 by Robert Palmer.) The company was also late getting into the open systems PC market, and encroaching technology threatened the company's viability. It reported its first quarterly loss ever in 1990 and a net loss for fiscal 1991. Palmer undertook numerous restructurings, massive layoffs (more than 60,000 people), and plant closings in an effort to remain competitive. Mitsubishi agreed in 1993 to manufacture Digital's new Alpha chip. In 1994 Digital sold its RDB database software operations to Oracle. The following year Digital and Raytheon formed a multiyear, multimillion-dollar agreement to upgrade the onboard computer of the US Navy's E-2C Hawkeye aircraft. Also in 1995 Digital developed the AltaVista Internet search engine, which was designed to index every word on the Web. AltaVista was launched that December. In 1997 Digital sold its printing systems business to Virginia-based Genicom. That year Digital sued Intel, accusing it of using patented technology governing branch management (used to speed up a computer chip) to develop the Pentium microprocessor. Intel countersued, accusing Digital of violating 14 Intel patents. To settle the litigation, Digital sold its semiconductor production operations to Intel in 1998. (The $625 million deal received approval from the Federal Trade Commission with the condition that Digital make its Alpha technology available to such Intel rivals as Advanced Micro Devices and IBM.) In June 1998 Compaq paid approximately $9 billion to acquire Digital. As expected, Palmer stepped down. The company was completely absorbed into Compaq. Digital was founded in 1957 by Kenneth Olsen, a graduate in electrical engineering from M.I.T. Digital's inaugural product was the world's first inexpensive minicomputer, the PDP. Its successor, the VAX, established Digital as a computing powerhouse through much of the 1970s and 1980s. At its peak in 1989, Digital employed close to 130,000 employees and had worldwide revenues of $14 billion, over half of which came from outside the United States. Besides instilling a strong engineering culture, Olsen put in place a matrix management structure. The matrix required that all business and industry groups (such as heathcare, media, personal computers, telecom, etc) build consensus with various functional groups - engineering, sales, marketing, and manufacturing - to launch products and services. The matrix allowed Digital to leverage scarce functional resources during the growth eras of the '70s and '80s. The 1990s had downsized the computer industry; Digital was no exception. Between 1991 and 1994, the firm lost over $4 billion. At the end of the 1994 fiscal year (June), Digital reported yearly operating revenues of $13.5 billion, down 6% from 1993, an annual net loss of over $2 billion (including restructuring charges of $1.2 billion), and 85,000 employees. The firm's cost structure was higher than average for its industry. Gross margins on products had declined due to pricing and a continued shift in mix to low-end, low-margin products.