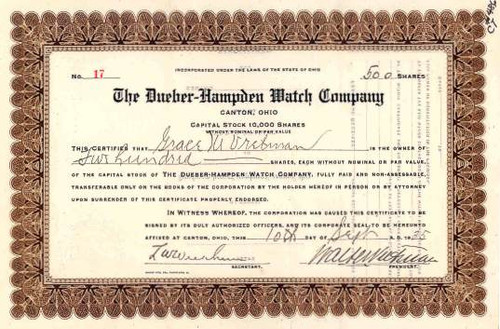 Beautifully engraved SCARCE certificate from the Dueber - Hampden Watch Company issued in 1925. This historic document has an ornate border around it. This item is hand signed by the Company's President and Secretary and is over 78 years old. Hampden Watch Company was founded in 1866 by Donald Mozart and George Rice, Provident RI. In 1887 the company moved to Springfield Mass. The Company was later bought by John C. Dueber. John C. Dueber owned one of the largest companies manufacturing pocket watch cases in the last quarter of the nineteenth century. Many other watch case manufactures united together in a boycott against the Dueber Watch Case Company after an anti-trust law was passed in 1886. Dueber had a major business decision to make. Could he go up against this threat and keep his business going or would he have to give in to the competition? He decided to buy the Hampden Watch Company of Springfield, MA and form the Dueber-Hampden Watch Company producing both watch movements and cases. He moved the newly merged company to Canton, OH in 1889 and by the end of that first year, they were producing 600 watches a day! The first 16 size watch was produced the following year. The company continued until 1930, when the entire factory along with all tools and parts, was sold to Armen Hammer for $325,000 who moved it all to Russia, where it became known as the Amtorg Watch Co. Twenty-eight freight cars full of machinery and parts made their way to Moscow to establish the first Soviet watch factory. Twenty-one former Dueber-Hampden watchmakers, engravers and various other technicians helped to train the Russian workers in the art of watchmaking as part of the Soviet's first Five-Year Plan. Amtorg, continues in operation today.