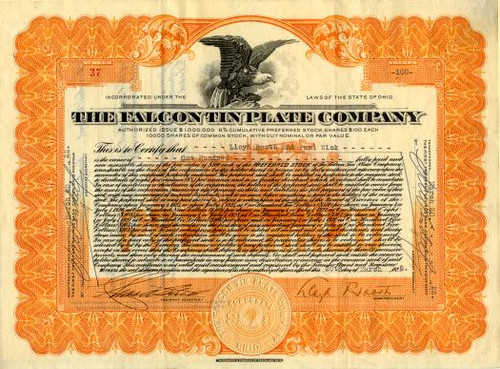 Beautiful certificate from the Falcon Tin Plate Company issued in 1922. This historic document was printed by Edwards & Franklin Company and has an ornate border around it with a vignette of an eagle and an underprint of men working. This item has the signatures of the Company's President, Lloyd Booth and is over 84 years old.

Certificate Vignette
Tin plates are thin sheets of iron or steel coated with tin (in former times, iron sheets were used, since the revolution in steel making, always steel). Their production involves two distinct operations: the making of the steel sheets or so-called black plates, and their tinning. The former of these operations, the more important, divides itself again into two; the making of the crude steel in the form of suitable bars, and the rolling of these bars into thin sheets suitable for tinning. Of the cost of a given quantity of tin plates, something like two-thirds is the cost of the black plates or steel sheets; and of the cost of the black plates again, 60 per cent is the cost of the steel bars (known in the trade as sheet bars).*47 The making of the fundamental raw material, crude steel in the form of bars,--has been subject to the general influences described in the preceding survey of the steel industry at large. The production of the black plates by rolling from the bars, and the coating of these sheets with tin, involve operations of a more special kind. The unexpected growth of the tin plate industry after 1890 was due chiefly to the cheapening of the fundamental raw material,--sheet bars. The decade after 1890, it will be remembered, was the period in which the American steel industry reached the stage of independence.