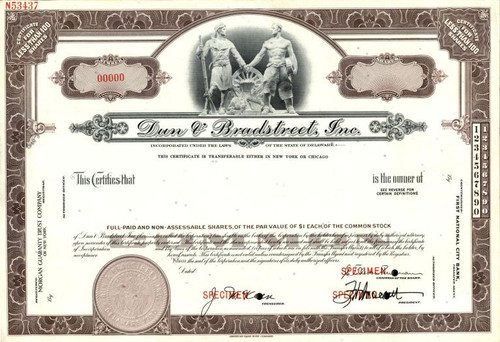 Beautiful engraved specimen certificate from the Dun & Bradstreet, Inc printed in 1961. This historic document was printed by American Bank Note Company and has an ornate border around it with a vignette of two allegorical men. This item has the printed signatures of the Company's President, J. Wilson Newman and Treasurer. 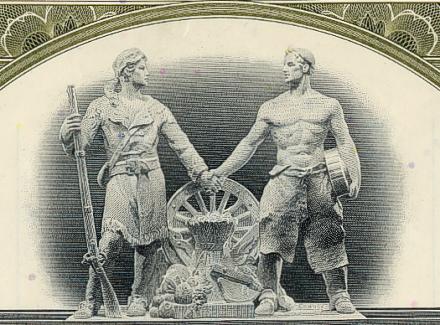 Certificate Vignette
In 1962 Arthur Dare Whiteside retired and was succeeded by J. Wilson Newman, who headed Dun & Bradstreet as president until 1960 and then as chairman and chief executive until 1968. Under Newman, Dun & Bradstreet embarked on a course of expansion and technological improvement. In 1958 the company began operating its own private wire network, which linked 79 of its major offices. This allowed credit information to be handled more expeditiously. The Dun & Bradstreet Corporation (NYSE: DNB), headquartered in Short Hills, New Jersey, USA, is among the leading providers of business information. Often called just D&B, it is perhaps best known for its D-U-N-S (Data Universal Numbering System) identifiers assigned to over 100 million global companies. Among its major divisions are Risk Management Solutions, Sales and Marketing Solutions, Supply Management Solutions, and E-Business Solutions. Principal customers include manufacturers and wholesalers, insurance companies, telcos, banks, and other credit and financial institutions. Revenues in 2005 were $1.443 billion. D&B's history dates to 1841, when Lewis Tappan (1788-1873) created a commercial credit service. RG Dun (R.G. Dun Mercantile Agency) was incorporated by Tappan's grandson in 1859 and counted US presidents Abraham Lincoln, Ulysses S Grant, Grover Cleveland, and William McKinley among its credit reporters. Subscribership grew from 7,000 in the 1870s to 40,000 in the 1880s. Its reports covered over one million US businesses in 1900. Dun merged with The Bradstreet Companies (founded 1849), a former competitor, in 1933. Past acquisitions include Moody's (1962, spun off in 2000); Funk and Wagnalls, encyclopedia publisher; AC Nielsen (1984, spun off in 1996); Intercontinental Marketing Services (IMS) (1988, spun off as Cognizant Corporation in 1996); RR Donnelley, directory printer (1961, spun off in 1998); and Hoover's, Inc., a business information service (2003). Other acquisitions include a number of media interests, largely in the 1980s and 1990s. D&B's information systems unit later led to the establishment of a company called Cognizant Technology Solutions(CTSH). The most famous product of D&B is DNBi, a database that allows subscribers to search out credit-related information on other companies. This is frequently used by companies for the purpose of Risk Management. D&B has recently established the Predictive Sciences and Analytics Center at Chennai, India. History from Wikipedia and OldCompanyResearch.com. About Specimens Specimen Certificates are actual certificates that have never been issued. They were usually kept by the printers in their permanent archives as their only example of a particular certificate. Sometimes you will see a hand stamp on the certificate that says "Do not remove from file". Specimens were also used to show prospective clients different types of certificate designs that were available. Specimen certificates are usually much scarcer than issued certificates. In fact, many times they are the only way to get a certificate for a particular company because the issued certificates were redeemed and destroyed. In a few instances, Specimen certificates we made for a company but were never used because a different design was chosen by the company. These certificates are normally stamped "Specimen" or they have small holes spelling the word specimen. Most of the time they don't have a serial number, or they have a serial number of 00000. This is an exciting sector of the hobby that grown in popularity over the past several years.